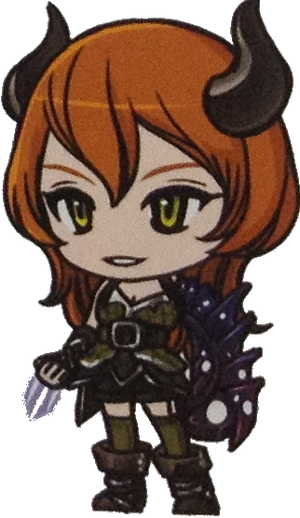 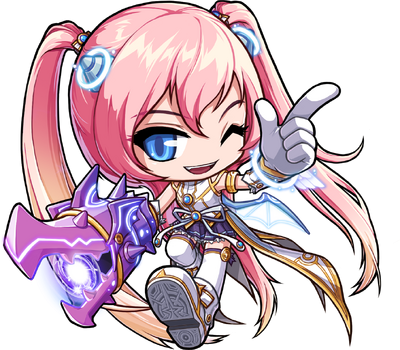 Unlike most Nova, Tear was born without a tail, rendering her incapable of performing magic. Frustrated, she decided to become a warrior instead, but was tormented relentlessly by her peers for this decision as well as her handicap. Her only friends were Kyle and Velderoth, and the three formed the "Helisium Force" together and dreamed of heading into battle and freeing the capital city from the grasp of the tyrannical Magnus.

One day while hanging out on the outskirts of Pantheon, the trio discover several of Magnus's followers who were trying to steal a relic that powered Pantheon's forcefield, the only thing keeping the Specter armies at bay. Velderoth went to get help while Kyle and Tear attempted to fight them off, only to be overwhelmed by the intruders' superior numbers. In a last ditch effort to foil their plans, Tear snatched the relic before they could, inadvertently fusing it to her arm before falling unconscious.

When she came to she learned that Kyle had been chosen to become the next Kaiser and about the predicament with the relic. She later learns that the relic housed the soul of a powerful (but perverted) Ancient Nova Dragon named Eskalade, who offered her power in exchange for favors, to which he reluctantly agreed. As a result, Tear became the Idol of the Battlefield, Angelic Buster!.

Age: Mid-Late Teens by the end of her storyline

Attack Potency: At least Multi-Continent level (Helped to defeat Magnus, one of the strongest Black Mage Commanders, and his lieutenants even though Magnus's power was increased by Kaiserium at the time)

Lifting Strength: At least Superhuman (Can wield a hammer larger than herself with relative ease)

Durability: At least Multi-Continent level (Is on par with Kaiser and survived the same attacks as him, but is significantly less durable due to her lack of armor)

Stamina: High (Fighting off a few hundred monsters is considered a daily chore in the MapleStory verse), she is unique in that she has no costs for any of her abilities, allowing her to continue firing without worrying about ability costs

Standard Equipment: Her Soul Shooter (Her primary weapon that shoots blasts from a "Soul Battery" and thus directly attacks the soul with several of her attacks and also bears the soul of the Ancient Nova Dragon Eskalade who can assist her with certain attacks)

Intelligence: Tear is not particularly bookish and is somewhat childish and irritable, but bears a wealth of combat experience for her age and can easily keep pace with Kaiser. She is a capable marksman and can shoot down most targets with ease. She is also somewhat smarter than Kyle in matters outside of combat, as shown by her annoyance toward's Kyle's inability to notice her crush on him or the fact that she is Angelic Buster despite decisive evidence

Weaknesses: She is somewhat irritable and impatient, her most powerful skills have cooldowns (which are exaggerated for gameplay purposes)

Retrieved from "https://vsbattles.fandom.com/wiki/Angelic_Buster?oldid=4106560"
Community content is available under CC-BY-SA unless otherwise noted.