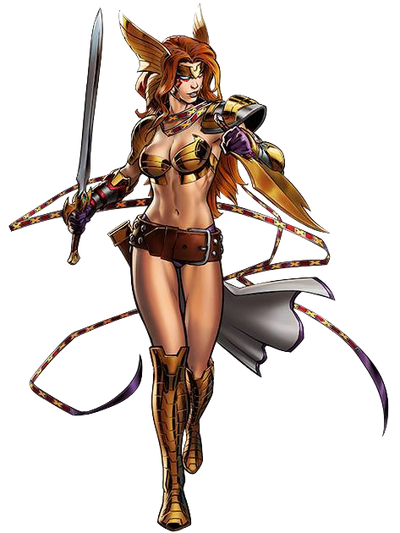 Angela is a fictional comic book superhero created by author Neil Gaiman and artist Todd McFarlane. She first appeared as a supporting antagonist in McFarlane's creator-owned series Spawn, making her debut in issue #9 in March 1993, and later starring in her own self-titled miniseries. She is an angel and a bounty hunter, working under the auspices of Heaven to oppose Spawn.

Angela was later the subject of a legal battle between McFarlane and Gaiman over the rights to the character, which Gaiman won. Gaiman later sold the rights to the character to Marvel Comics; she was integrated into the Marvel Universe in the 2013 story "Age of Ultron", and her character was expanded upon in the 2014 storyline "Original Sin", where she was established to be the lost sister of Thor.

Age: Unknown (was born shortly before the war between Asgard and Heven which happened during a time when humans didn't know how to speak)

Attack Potency: Solar System level (Listed in the same range as Carol Danvers. Has fought Thor, albeit while he was weakened or unworthy)

Speed: Massively Hypersonic (Comparable to characters such as Hercules)

Stamina: Extremely High, Angela's advanced musculature is considerably more efficient than that of a human and most other Asgardians. Her virtually inexhaustible stamina enables her to hold her breath for an undefined period of time, and exert herself at peak capacity for months without tiring at all.

Intelligence: Above Average. Highly skilled with many weapons.

Note: Not to be confused with the Image Comics version of this character. After a legal battle between Todd McFarlane and Neil Gaiman in 2002, McFarlane lost the rights to Angela. Gaiman later sold the rights for Angela over to Marvel Comics, making her first debut in Age of Ultron #10.