VS Battles Wiki
Register
Don't have an account?
Sign In
Advertisement
in: Tier 4, Tier 4-B, Characters,
and 19 more 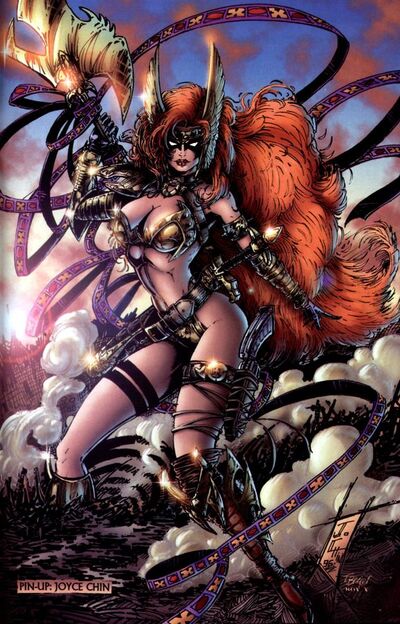 Angela is a supporting character from the Spawn Comic Series, created by Neil Gaiman and Todd McFarlane, debuting in Spawn #9. She is a high-Ranking Angel of Heaven, being a Hellspawn Slayer and a hunter of Demons and all manner of beasts. Angela is a fierce, brutal warrior who takes joy in the violence of challenging battles yet is loyal to the bureaucracy and regulations of Heaven and follows her sisters' orders without question.

Like most of the angels, she cannot remember her conception, which, much like the Heavenly Realm she originates from, defies a common understanding of time. Angela was formed from the amalgamation of 5 Human Souls, a mother who knew nothing but pain in life: A woman in the African Savannah 100,000 Years ago, who sacrificed herself to Leopards to save her child. An old slave of Ancient Egypt, dying from exhaustion from her torturous work. An abolished slave girl of the deep American South, who was hunted and shot to death by Klansman. A Jewish mother during Nazi Germany put to death in Auschwitz, and finally, a woman who after 8 years of constant pain in a hospital bed, dies on the day after tomorrow.

When said souls were combined into a being of light, creating Angela 100,000 Years in the past. The young angel was mentored by the angel Katherine, and for eons trained in various combative arts. Over her history, she has killed over 30 Hellspawn, including Medieval Spawn. She and Al Simmons have many encounters throughout the series and act both as allies and adversaries.

Attack Potency: Solar System level (Can harm those who can harm her; far above both Abdiel who could cause a supernova and Phlegethonyarre who destroyed Earth with this much energy)

Speed: Massively FTL+ (Fought against the Kron and the Argus at roughly 4,436,000c and should be comparable to angels that can reach speeds 6.3 billion times faster than light)

Striking Strength: Solar System Class (Should scale to her attack potency and durability)

Durability: Solar System level (Withstood attacks from The Kron who was strong enough to destroy stars and planetary systems; also withstood the Kron's lightning which was described to be an exploding pulsar)

Intelligence: Gifted. Being well-renowned as a legendary warrior and hunter, Angela is deceptively intelligent. In addition to possessing roughly 100,000 years of combat experience and achieving top marks in her class, she's able to track a Hellpsawn's whereabouts as she was able to successfully lure a newly created and confused Medieval Spawn to a remote location before finishing him off with her Dimensional Lance. During her return to Heaven, Angela managed to form a plan with her friends to bring down her accuser, Gabrielle by secretly recording the conversation where Gabrielle confessed to all her crimes, later turning the evidence over to her lawyer, Callindra.

Weaknesses: She's a bit cocky and her Angelic Ribbons have limited strength and can be knocked out with a solid beating.