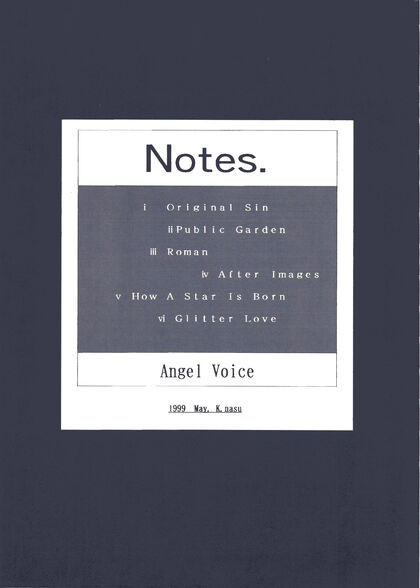 Often referred as just "Notes". It's a short novel published in the angel-centered doujin Angel Voice at 1995. The story takes place in a post-apocalyptic world where mankind eventually destroyed nature and thus killed Gaia the spirit of the Earth. The planet were no longer able to sustain the life. Yet thanks to the power of science humanity managed to live on. They created the enhanced humans (Liners) who were able to live on the ruined planet and A-Rays, creatures made with genetic engineering by combining humans with other various extinct lifeforms. Soon a war broke out between the Liner and A-Ray races that nearly led to the extinction of both parties. The war had a sudden interruption with the unexpected arrival of the 8 Aristoteles, ultimate beings of each planet in the Solar System. The Aristoteles had only one objective, annihilation of all remaining life on Earth. The former enemies quickly became allies in the hopeless struggle to survive the war against this newfound threat.

The main character is Godo (aka Gun God), the last unmodified and thus "pure" human on Earth and the possessor of the Black Barrel, one of the only weapons capable of defeating the Aristoteles.

Notes is arguably the strongest fiction of the Nasuverse. It takes place more than thousand years in the future compared to the present timeline with accordingly advanced technology. High tier A-Rays were mentioned to have the power output equivalent a nuke. The enhanced humans also have 78 Ether Liners with the ability to summon Demonic Swords out of their bones and possess power above even those A-Rays.

The Six Sisters of the A-Ray race rank above of the Ether Lines though and the death cry of one of them had enough power to raze a continent.

Still, even Earth's combined strength were insignificant compared to the Aristoteles (Types).

Each Type is the strongest being of their planet and have no real concept of death plus any of them can potentially kill all life.

Only broken weapons like Godo's Black Barrel and Ado Edem's Slash Emperor have a chance to bring those beings down, or at least temporarily.