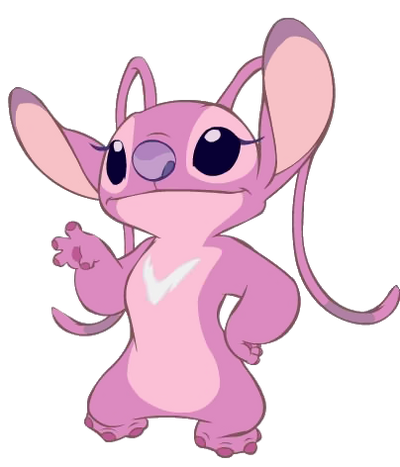 Angel is shown to be seductive and deeply enamored with Stitch. She is usually friendly, but sometimes she can be downright mean and often ungrateful. Though since she has been turned good, her nice side shows a lot more.

She has a very feminine voice and likes to flirt with the other experiments. She is affectionate towards Stitch and enjoys being around him whenever possible. Thanks to her new life after her evil-to-good conversion as a singing sensation, she also can be pretty hard to please.

Age: Unknown, was created prior to Stitch

Attack Potency: At least Island level (Should be superior to Splodyhead and only slightly inferior to Stitch)

Speed: Subsonic movement speed with Hypersonic reactions (Should be comparable to Stitch)

Durability: At least Island level (Should be superior to Splodyhead and only slightly inferior to Stitch)

Stamina: Very high (Should be comparable to Stitch)

Intelligence: Likely extremely high (Should be comparable to Stitch)

Weaknesses: Her Siren Song will not affect experiments made after her