VS Battles Wiki
Register
Don't have an account?
Sign In
Advertisement
in: Characters, Umineko no Naku Koro ni, When They Cry,
and 27 more 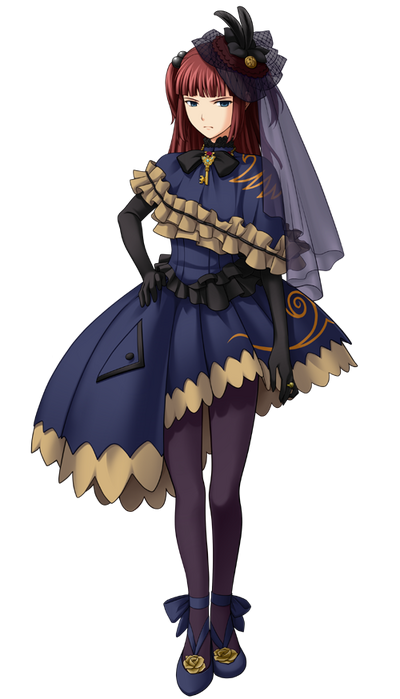 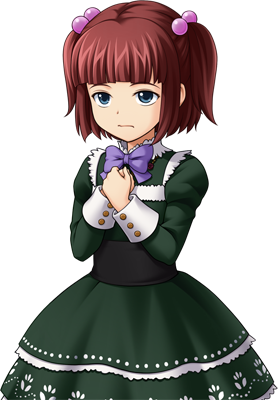 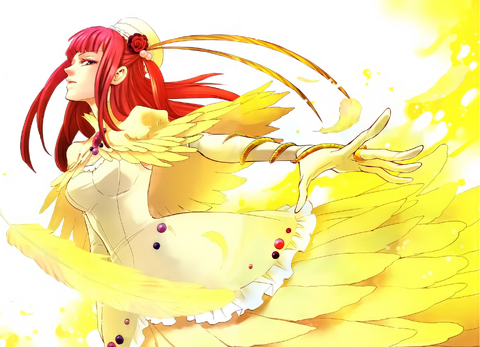 Ange Ushiromiya is the daughter of Rudolf and his current wife, Kyrie, as well as Battler's younger sister and the youngest member of the Ushiromiya family. Having been sick at the time of the family conference of 1986 and unable to attend it, Ange escaped the gruesome serial murders which took place on October 4th and 5th, being eventually placed under the care of her aunt Eva, the only survivor of the massacre, and spending the next several years in a strict and abusive relationship under her care.

In 1998, having grown up into a bitter and resentful person, she eventually inherited the Ushiromiya family headship, alongside the title of the Golden Witch, Beatrice, after Eva's death, leaving her as the sole descendant of the Ushiromiya. This chain of events leads to Ange contemplating suicide ontop of a skycraper, where she meets with the witch Bernkastel, and engages on a long journey to discover the single truth of what happened in 1986.

Age: 18. Though she exists beyond the concept of time in her Meta-World incarnation.

All previous powers and abilities, in addition to: Immortality (Types 1, 2, 3, 4 and 8), Regeneration (High-Godly. Can regain her form by regaining her ability to think, even if her existence is conceptually erased and sent to the depths of oblivion beyond all stories and layers), Dimensional Travel (Can willfully manifest in various layers of existence, both higher and lower, adapting her own existence to the atmospheric pressure of higher worlds), Cosmic Awareness, Void Manipulation, Mind Manipulation, Soul Manipulation and Plot Manipulation (Can physically interact with and manipulate kakera, which are crystallizations of lower worlds that record and contain infinite possibilities, as well as their fate and plot, encompassing even spiritual/mental realms and those devoid of space and time entirely), Reactive Evolution and Adaptation, Shapeshifting, Conceptual Manipulation (Type 2. Can manipulate the concepts of the Human Domain, which are visualized as physical objects on her level of existence, and can create several concepts on the level of a higher-order world out of her thoughts), Nonexistent Physiology (Type 2. Exists as an entity of nothingness at the core of her being, with her physical form being constructed and defined solely by her thoughts), Resurrection (Can easily return from death by regaining her interest and will to live, as the concept of time does not exist in the higher domains), Abstract Existence (Type 1), Incorporeality, Fusionism, Avatar Creation, Acausality (Type 5. Exists completely outside of the chessboard and is unrestrained by the limitations of the Human Domain, including that of fate, time and causality), Possession (Can take over the body of her piece self, as well as change it into her own), Resistance to Mind Manipulation, Soul Manipulation, Void Manipulation (Higher Beings adapt to the atmospheric pressure of higher worlds which can erase one's mind and soul. This allows them to resist it overtime so they won't get erased by said pressure) and Conceptual Manipulation (Meta-World beings are defined by their thoughts as a conceptualized form and are able to resist conceptual attacks on their identity to a degree)

Attack Potency: Athlete level. Building level with Summons (Can summon The Seven Stakes of Purgatory, with her magic making them stronger than they've ever been and allowing them to easily ignore the massive amounts of anti-magic toxin exhuded by guns and regular humans). At least Island level, possibly Moon level, likely High Universe level (Her magical power ultimately surpassed both Maria and Beatrice, and should be superior to Eva-Beatrice as well, as the Endless Witch of 1998 and the final person to take on the mantle of the Golden Witch). At least Hyperverse level, potentially up to High Hyperverse level with Endless Magic (Endless Magic can act as a way for one to journey through the infinite layers of the sea of fragments, being potentially capable of granting infinite evolution and apotheosis to a being of a lower-order when paired with something such as Maria's Magic of Origins, turning 1 into ∞) | Complex Multiverse level (Exists in the Meta-World, a higher realm of existence from which the entire Human Domain is regarded as fiction and its inhabitants are seen as pieces laid on a chessboard, their fates and lives merely small fragments which can be manipulated and physically interacted with even by normal humans inhabiting this perspective. This includes structures such as the Underside of the Chessboard, a void of nothingness completely beyond space and time which resides "nowhere" in relation to the entire world of the pieces) to Hyperverse level (Accessed the Golden Land, the highest and most impenetrable layer of Beatrice's territory, against the latter's will. Was brought to the Witches' Theatre, the highest layer of Bernkastel's Catbox) | Outerverse level (Allowed to manifest in Aurora's Study, an even higher realm which exists above the entire World of Witches, and was later brought to the City of Books, which exists on a far higher plane than everything else in the series and could contain her entire life and journey so far as a single line of a book) | Outerverse level (Awakened to her true nature as a Witch of Resurrection and gained dominion over Battler's gameboard, which had extended to encompass even the City of Books, allowing her to revive all of her friends and family and bring all of them to her own level of existence, something said to be only possible for a witch of the Senate. Her golden truth completely negated Bernkastel's Red Truths and made her family invulnerable to all of her attacks, and her golden eagle ultimately overpowered the Witch of Miracles completely and caused her to revert into a cat form, creating an earthquake which shattered the ceiling of the City of Books)

Speed: Athletic Human. Summons can be up to Sub-Relativistic (The Seven Stakes of Purgatory perceive bullets as frozen in time when under her command) | Immeasurable (Freed from all of the material world's restrictions, and transcends even realms devoid of space and time entirely such as Gaap's Abyss) | Irrelevant | Irrelevant

Durability: Street level (Unharmed after jumping from the third floor of a building and landing ontop of a car). At least Island level, possibly Moon level, likely High Universe level with Magical Barriers. Hyperverse level against Supernatural Attacks with Endless Nine (Withstood an attack from Territory Lord Beatrice with no damage whatsoever, and should be equal to Battler, who can ignore even Virgilia's Gungnir) | Complex Multiverse level to Hyperverse level | Outerverse level | Outerverse level (Her own existence is ensured by the golden truth, thus being completely invulnerable to even attacks coming from the likes of Bernkastel, who failed to kill her despite repeated attempts to deny her existence and proclaim her death with the Red Truth)

Range: Tens of kilometers with magic (Superior to Beatrice and Virgilia, who can cover all of Rokkenjima's circumference with their attacks, and Eva-Beatrice, who created a sea of jelly as deep as the mariana trench), up to Complex Multiversal (Should be able to replicate most of Beatrice's magic, including creating a portal to the Underside of the Chessboard) | Hyperversal | Outerversal | Outerversal

Intelligence: Gifted. Figured out Itouikukuro Zerogonanaroku's identity in a short period of time, and has some experience in dealing with mysteries and battling against witches due to having watched the fragments of Battler and Beatrice's games, though she is still noted to be nothing compared to them.

Endless Magic: The signature magical system utilized by the Endless Witch, whose foundations lie upon the concept of infinity, be it as an endless repetition or an infinite expansion, hence allowing her to revert anything back to its original state by making them remember the form which they used to hold, repairing broken objects and resurrecting people from the dead, as well as allowing Ange to recover from fatal injuries by rewinding her body back to its original state, and creating infinity out of any number so long as it is not 0, modifying finite quantities so that they expand infinitely.

However, the true basis of Endless Magic lies on the concept of a "a cat in a box", that is, an unobserved entity of infinite variation whose uncertain existence makes it so all possible interpretations of them are equally valid and impossible to be denied, causing it to be the root of infinite possibilities and scenarios. Thus, the Endless Witch is akin to a storyteller who weaves infinite tales and stories, shaping their own worlds and controlling the infinitely-stretching possibilities contained in their catbox.

Truths: Special moves utilized in debates between Witches and Humans taking place in the Meta-World, being statements denoted by specific colors which often manifest as conceptual weapons that directly target the enemy's very existence in an attempt to deny it, and are thus impossible to physically avoid, forcing opponents to counter the attacker's arguments with another truth. As the damage dealt by the Truths is conceptual, rather than strictly physical, they completely bypass conventional durability and allow Ange to skewer and even kill opponents much more powerful than herself.

Endless Nine: An impenetrable barrier woven together by Ange's complete denial regarding the existence of witches and magic, and her firm belief that they are nothing but illusions and daydreams, which grants her an absurdly high anti-magic resistance (99.99999999...) and makes her completely immune to any supernatural effects directed at herself, or any attacks coming from beings whose existence she denies, even those as powerful as the Territory Lord. Likewise, it also allows her to easily bypass magical barriers and forcefields, as well as tear apart through supernatural entities as if they were cardboard.

Eventually, Ange's Endless Nine became imbued with her own golden truth and grew strong enough to be capable of completely negating even attacks from Bernkastel, making her and her family completely immune even to her attempts to deny their existence using the Red Truth.

Game Master: After awakening to her full nature as a Witch of Resurrection, Ange gained control over her own gameboard, with her authority over it overuling both Battler and Bernkastel, the previous Territory Lords of the fragment. As Game Master, Ange exists on a higher plane of existence than everything else in her territory, and the world shapes itself to her will under this state, with even attacking her through conventional means being impossible without her direct permission, and she can similarly decide who enters and who leaves it, and what kinds of magic are possible to be utilized within its boundaries. In addition, she can weave stories and tales on a far more advanced scale than other higher-order beings, being able to manipulate countless fragments to piece together her own plotline, as well as rewriting the resulting structure at will.