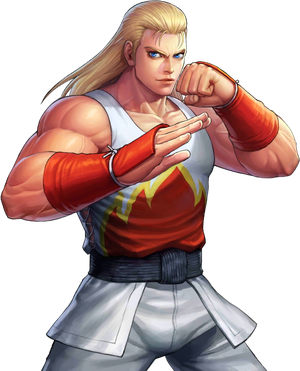 Andy Bogard is one of the main protagonists in SNK's fighting video game series Fatal Fury and also appeared in the King of Fighters series as well. He is Terry's younger brother, who has been adopted by Jeff Bogard until he is killed by Geese Howard, deciding to perfect his own martial arts in Japan to differentiate himself from Terry. They later reunited and joined the King of Fighters tournament alongside Joe Higashi to avenge their father, but lost before reaching Geese who Terry defeated.

Since Geese's death and the birth of Second Southtown, Andy trained Hokutomaru as his disciple/apprentice, sending him to the tournament in his place to see what he has learned during the events of Garou: Mark of the Wolves.

Powers and Abilities: Superhuman Physical Characteristics, Martial Arts (Of Koppoken/Shiranui-ryuu ninjutsu styles), Acrobatics, Stealth Mastery (Is proficient in stealth due to his ninja training), Chi/Energy Manipulation, Energy Absorption (Can gather chi/energy from the earth), Fire Manipulation (Can engulf his body in flames and increase his attack power by using fire), Statistics Amplification (Can use chi energy/fire to increase the damage of his attacks)

Speed: Massively Hypersonic (Can keep up with the likes of Terry Bogard and Mai Shiranui)

Durability: At least Small City level+ (Can survive hits from characters on this level)

Stamina: High (Can still fight people even while heavily injured)

Intelligence: Above Average (Is proficient in combat, acrobatics and stealth when it comes to his ninjutsu training. Trained Hokutomaru in the ways of Shiranui-ryuu ninjutsu and Koppouken)

Retrieved from "https://vsbattles.fandom.com/wiki/Andy_Bogard?oldid=6981116"
Community content is available under CC-BY-SA unless otherwise noted.