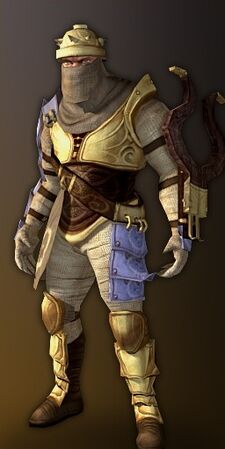 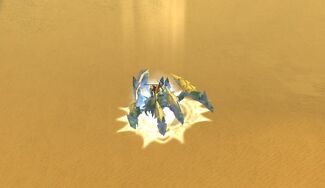 Andromolek is an Alin soldier, described as the greatest swordsman of the age and one of the mightiest warriors. In his passion to destroy the Dark Alin, he began experimenting with their powers, becoming a master of glass magic, a grave crime among the Alin. Thus, he has been exiled by the Alin Kingdom.

Tier: Likely 9-B with attacks and Dark Walkers, At least High 8-C with Glass Cannons

Speed: Subsonic attack speed with regular attacks and powers, Superhuman movement speed (as fast as Sawu). Reaction/Combat speed is hard to determine due to game mechanics, but likely Subsonic

Intelligence: Likely decently high. He's regarded as a prodigy and one of the migthiest warriors in the Alin Kingdom. Possesses vast knowledge about magic and corruption techniques.

Weaknesses: None outside of game mechanics

Note: All of Andromolek's stats without his spider are likely Athlete level

Retrieved from "https://vsbattles.fandom.com/wiki/Andromolek?oldid=6601939"
Community content is available under CC-BY-SA unless otherwise noted.