VS Battles Wiki
Register
Don't have an account?
Sign In
Advertisement
in: Tier 4, Tier 4-B, Tier 3,
and 47 more 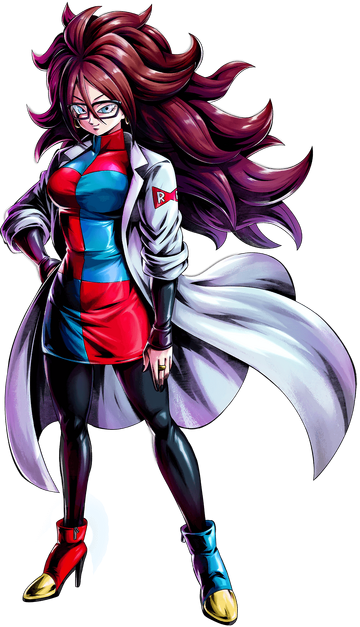 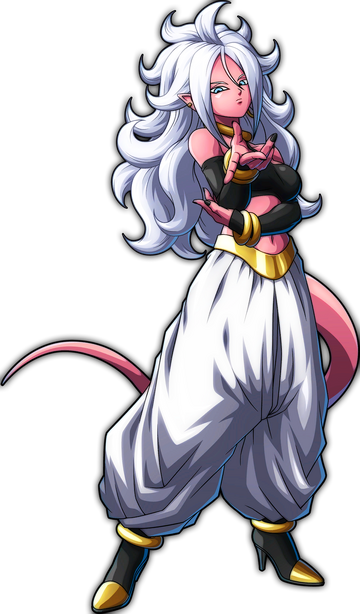 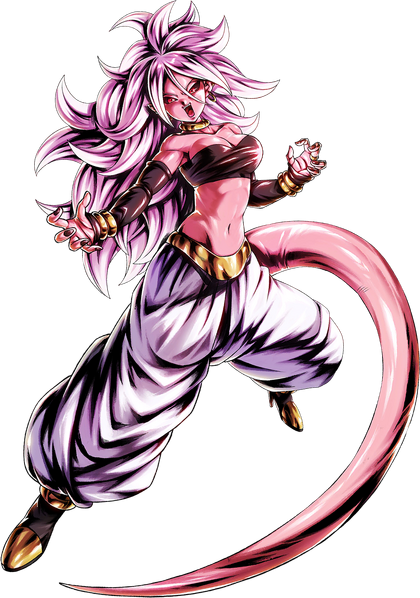 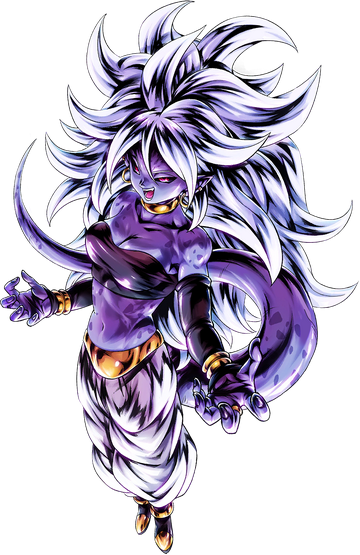 Android 21 is a New-Type Android created by Dr. Gero. When she was a human, she was the mother of the man who was the model for Android 16, presumably making her Gero's wife. Over time, Gero's Supercomputer continued to work on her, giving the cells of the universe's greatest warriors and minds, even Cell and Majin Buu.

She possesses a split, evil personality that arises whenever she is hungry, becoming violent and wishing to devour all the powerful fighters that come to face her. Eventually, this half splits off from the rest of her via fission, becoming a distinct entity.

Superhuman Physical Characteristics, Genius Intelligence, Acrobatics, Accelerated Development (Training; Physical Stats, Abilities), Master Martial Artist, Ki Manipulation (Can be used defensively and offensively, to strengthen her skin or to fire ki blasts, which can home in on targets, and form defensive barriers), Ki Sensing (Can locate others by reading their ki), Enhanced Senses (Should have the senses of a Saiyan, allowing her to locate small, distant objects by their smell, see clearly over long distances, and track the movements of others even in pitch black conditions by feeling vibrations in the air), Self-Sustenance (Types 1 and 3), Flight, Spaceflight, Absorption (She can absorb ki and others to gain their abilities and knowledge, increasing her own power as well), Reactive Power Level (Due to her Saiyan blood, 21 grows stronger every time she fights and can become stronger in the midst of combat, vastly increasing in strength whenever she is mortally injured), Transmutation (Can turn people into candy and other types of food), Soul Manipulation (Can swap out and seal people's souls), Power Nullification (Can suppress and seal the power of others with her waves), and Memory Manipulation (Krillin couldn't remember what happened after the waves affected him) with the Wave Machine, Transformation, Longevity, Resistance to Extreme Cold and Cosmic Radiations

Same as before, plus Self-Sustenance (Type 2), Power Mimicry (Can learn abilities that she has only seen once, like Goku's Instant Transmission), Telekinesis, Teleportation, BFR, Body Control, Elasticity, Shapeshifting, Immortality (Type 3), Regeneration (Mid-High; her regenerative capabilities are superior to Buu's, and he can regenerate from being reduced to vapor), Resistance to Poisons and Power Nullification, Can possibly create dimensional rifts and destroy space-time and pocket dimensions with her energy via powerscaling

Attack Potency: Solar System level (Superior to what levels of power Cell has shown off, which therefore includes his Super Perfect form, and it's stated that her potential surpasses Cell's own) | Universe level (Comparable to Super Saiyan Goku after the events of Resurrection of F)

Intelligence: Extraordinary Genius. Android 21 is said to be a brilliant scientist whose intelligence rivals and may even surpass that of Dr. Gero. She is capable of copying techniques after observing them once. She possesses the skills and knowledge of the great warriors and scientists who were incorporated into her design

Weaknesses: Android 21 can be somewhat overconfident and can lose control when her urge to feed goes out of control

Ki: The fighting power and life force of a martial artist, a tangible energy derived from the user's vigor, courage, and mind. It can be used in a number of ways, such as to surpass the limits of one's body to greatly increase in strength, and it can be fired as blasts of energy or used to create defensive barriers. Ki is a large part of Android 21's superhuman abilities, alongside her unusual composition and the varied DNA she possesses. Due to her nature as a hybrid created from the DNA of many fighters, Android 21 possesses many of their techniques.

Sweet Tooth: Android 21 has the power to fire a beam of energy that will transform whatever she hits into whatever she desires, such as a macaron, cupcake, or donut. This also allows her to absorb them, gaining physical traits similar to their own, along with their abilities, and a great increase in her power.

New Type Android Physiology: Android 21 was instilled with the cells of the greatest warriors and minds to ever visit Earth, containing the DNA of Son Goku, Vegeta, Piccolo, Frieza, King Cold, probably Androids 17 and 18, Cell, and even Majin Buu itself. Due to this combination of genes, Android 21 possesses numerous favorable traits and special abilities. Like Frieza's race, she can survive the gravest of injuries and live in the vacuum of space, and she has the regenerative capabilities of Majin Buu, and due to her Saiyan DNA, regenerating will actually make her stronger if she recovers after being close to death. She possesses even greater evolutionary potential than Cell.

Majin Physiology: Due to possessing Majin Buu's cells, when Android 21 transforms she gains an unusual physiology that she can manipulate as she pleases, allowing her to stretch her limbs to extreme lengths, shape her body to mimic others, rip off chunks and use them to encircle and trap others, and even liquefy her own body before forcing himself into an opponent's orifices and expand, destroying them from the inside. Her amorphous body is highly resistant to injury and can split into various other bodies through fission.

Of the many unique abilities that Buu's cells give her, one of the most useful and powerful is her immense regenerative power. Even if she is blown to bits or reduced to vapor, she can regenerate rapidly, reforming her body from even as little as pink gas. 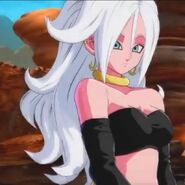