VS Battles Wiki
Register
Don't have an account?
Sign In
Advertisement
in: Tier 4, Tier 4-C, Tier 3,
and 34 more 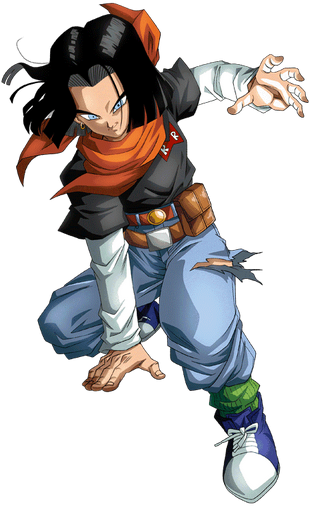 Android 17 (real name: Lapis) is one of the Red Ribbon Androids created by Dr. Gero to carry out his vendetta against Son Goku. Whereas the other Androids are mostly mechanical, 17 and his twin sister are cyborgs, having been forcibly transformed into their current states by Gero.

Powers and Abilities: Superhuman Physical Characteristics, Skilled Martial Artist, Accelerated Development (Training; Physical Stats, Abilities), Acrobatics, Enhanced Senses, Ki Manipulation (Can be used defensively and offensively, to strengthen his skin or to fire ki blasts, which can home in on targets), Explosion Manipulation (Capable of detonating ki attacks), Heat Generation (Via ki attacks and aura), Shockwaves Generation, Self-Sustenance (Type 3), Flight, Barrier Manipulation (Can paralyze enemies and trap them), Longevity, Marksmanship, Vehicular Mastery, Self-Destruction, Resistance to Extrasensory Perception | All previous abilities, Can possibly create dimensional rifts and destroy space-time and pocket dimensions with his energy via powerscaling, Resistance to Empathic Manipulation (Was unaffected by Ribrianne's Light of Love, which causes anyone who smells the aroma released by the attack to become infatuated with her and the other Kamikaze Fireballs)

Attack Potency: At least Star level+ (Much stronger than his future self[1] who beat Future Gohan while using less than half of his full power[2], superior to 18, easily defeated Future Trunks, fought Piccolo to a standstill after he fused with Kami, and would've outlasted him had Cell not appeared) | Universe level (After training for over 10 years he grew strong enough to fight evenly with Super Saiyan Blue Goku. In the Tournament of Power he clashed with Ribrianne and fought against Toppo), Universe level+ with Self-Destruction (He was able to cancel a powerful attack from Jiren by self-destructing.)

Durability: At least Star level+ (Took many blows from Piccolo and blocked his Hellzone Grenade with his barrier) | Universe level (Took attacks from Ribrianne and Toppo), Universe level+ with Barriers (His barrier withstood an attack formed by Anilaza, SSB Goku, SSB Vegeta, Ultimate Gohan and Golden Frieza. It took multiple attacks from GoD Toppo to break his barrier)

Stamina: Limitless. As an Infinite Energy Model of Android, 17 has access to an unlimited supply of energy.

Intelligence: Android 17 has always been a skilled martial artist and combatant, capable of holding his own against the likes of Piccolo and even gaining the upper hand, and his skill and cunning only grew in the years leading up to the Tournament of Power, as demonstrated by his much greater control over his techniques and his pragmatic style of combat.

Weaknesses: Initially, Android 17 was quite arrogant and most of his choices during his initial appearance were motivated by what he simply called "The Game", but he has grown past his overconfidence since then.

Android Physiology: Once a human, Android 17 was converted into a cybernetic android (or "Artificial Human") by Dr. Gero, modified on a cellular level to be superhuman and instilling him with an infinite supply of energy and immense power. Due to his artificial energy, 17 has no ki signature and cannot detect ki normally himself. As opposed to the fully mechanical models, 17's organic components mean that he can train and grow stronger over time and he ages much more slowly than a regular human. While he does not make use of normal ki, 17 can still utilize his own energy for a variety of attacks.

Frieza (Dragon Ball) Frieza’s Profile (Both were 3-A)