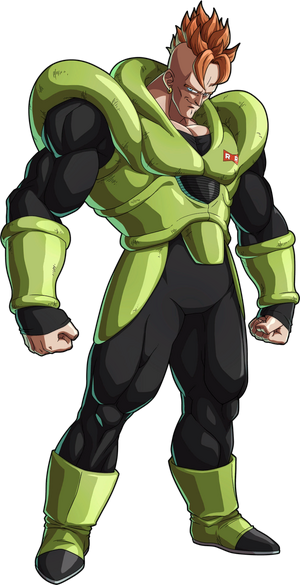 Built by Dr. Gero in the image of his dead son, Android 16 is one of the Red Ribbon Androids created with the intent of carrying out Gero's vendetta against Son Goku. While immensely powerful and fully mechanical, 16 was deemed unfit for combat due to his kind personality and deactivated.

Age: Unknown (Active for for only a few weeks)

Powers and Abilities: Superhuman Physical Characteristics, Acrobatics, Enhanced Senses, Energy Manipulation (Can be used defensively and offensively, to strengthen his skin or to fire ki blasts, which can home in on targets, and form defensive barriers), Ki Sensing (Can locate others by reading their ki), Inorganic Physiology (Type 2), Self-Sustenance (Types 1, 2, and 3), Shockwaves Generation, Flight, Spaceflight, Self-Destruction (Prior having his bomb removed), Longevity, Body Control (Can detach his limbs for Hell's Flash and Rocket Punch), Skilled Martial Artist, Resistance to Extrasensory Perception, Extreme Cold and Cosmic Radiations

Speed: At least FTL+ (Comparable to Imperfect Cell and superior to the other Androids)

Stamina: Limitless. As an Infinite Energy Model of Android, 16 has access to an unlimited supply of energy.

Intelligence: Android 16 is a wise and skilled combatant capable of holding his own against other skilled martial artists such as Cell.

Weaknesses: 16 is a pacifist and will not fight unless he needs to, or if he's going to be fighting Goku.

Android Physiology: Android 16 was made by Dr. Gero to be a fully mechanical humanoid android (or "Artificial Human") possessing immense power beyond that of most of his other android units. Due to his artificial energy, 16 has no ki signature, but a built-in radar allows him to detect and analyze the powers of others. Built for combat, 16 has a variety of weapons built into his body, and he can fire out his fist as if it were a rocket. This is not all he has, however, as while does not make use of normal ki, 16 can still utilize his own energy for a variety of attacks and even self-destruct with enough force to destroy the planet.