VS Battles Wiki
Register
Don't have an account?
Sign In
Advertisement
in: Characters, Male Characters, Book Characters,
and 43 more 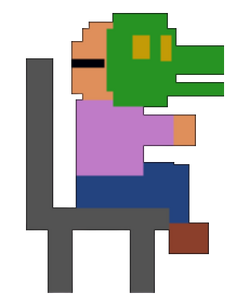 Andrew was one of the victims of the Man in Room 1280, stuffed within Golden Freddy, seemingly alongside Kelsey. After the man was burned in a fire and horribly disfigured, Andrew attached himself to the man's soul and kept him alive purely to make him suffer, fighting constantly with the man's spirit for years as he tortured the man with constant, horrific nightmares. After he was brought to the Fazbear Entertainment Distribution Center, he broke free and chose to spread his anger to several of the toys around him, including Ella, Fetch, the Plushtrap Chaser, and Yarg Foxy.

Age: Unknown (Was a child before being killed)

Classification: Ghost of a young boy in an alligator mask

Immortality (Type 7), Intangibility, Invisibility, possibly Illusion Creation (Kelsey may or may not have been just an illusion), Telepathy (Devon had felt drawn to the Fazbear location), Technology Manipulation (Is implied to have created a cell service dead-zone around the Fazbear Pizzeria), Sound Manipulation (Devon, Mick, and Kelsey heard something slithering in the walls of the Fazbear location. An unidentified voice called out to Devon while he was alone)

Immortality (Type 7), Intangibility, Invisibility (Was invisible after leaving the patient's corpse at the Fazbear Entertainment Distribution Center, despite the visible illusions of himself created around Heracles Hospital), Aura (All human emotions, when pushed to the extreme, have the power to impact their surroundings, especially the more negative the emotion is), Rage Power (Andrew's powers are strengthened by his rage; rage and agony being the most powerful emotions), Possession (Possessed his killer's body by attaching himself to their soul, Possessed various objects in the distribution center (including Fetch, Ella, and the Plushtrap Chaser as well as several piles-worth of other toys) by "throwing his anger at them" and imbuing them with his agony and rage), Power Bestowal (Grants the toys he possesses some of his powers, Should also be responsible for Fetch seemingly being able to manipulate the Zero Point Field), Body Control (Could move the patient's arm to write out answers to Arthur's questions, After arriving at the Fazbear Entertainment Distribution Center, shook the patient's body to the point of exploding), Life Manipulation and Biological Manipulation (Despite the heavy damage and decay of the patient, Andrew kept his body alive and functioning for years, even after the hospital took him off life support. Kept the patient's body functioning despite being injected with lethal doses of morphine), Resurrection (Resurrected the patient after Nurse Thomas suffocated him with a pillow), Fragrance Manipulation (Slowly intensified the stench of the patient's corpse the more the nurses tried to kill him), Blood Manipulation (Ejected the patient's blood, and later a green, putrid slime, from his mouth when Nurse Thomas tried to suffocate him, drenching the pillow used and getting Nurse Thomas sick), Explosion Manipulation (Shook the patient's corpse hard enough to cause it to burst), Nightmare Inducement (Enforced constant nightmares into his killer, Forced Nurse Ackerman to recall horrible memories of sitting next to her dying son's hospital bed, Ella cursed Delilah with nightmares as well), Illusion Creation (Created illusions of himself all over Heracles Hospital, including places a person wouldn't have access to like the basement or on top of a large statue), limited Perception Manipulation (People who looked at the patient's body felt their eyes burning and watering, though whether or not this is Andrew's direct doing or just an effect of circumstance is unknown, Ella may have been responsible for blurring Delilah's vision at one point), Darkness Manipulation and Telekinesis (Can cast shadows to loom over people, Used a shadow to throw morphine vials off the bed, Used a shadow to tear the pillow from Nurse Thomas' grasp, Tore a syringe from Nurse Colton's hand and lunged it at her throat before later snapping it in half), Air Manipulation (Created a gust of air to snuff out the candles Nurse Colton had laid out across the room before throwing them at the wall), Heat Manipulation (Caused Room 1280 to increase in temperature), Mind Manipulation (The piece of Andrew's agony contained solely within Fetch's battery pack caused Phineas such excruciating pain that it "annihilated his consciousness", Andrew's rage also hurt Jake due to proximity), minor Ice Manipulation (Strong enough emotions are capable of creating ice crystals. Phineas was capable of producing one with his own agony and Andrew's rage far exceeds Phineas'), Curse Manipulation (Is implied to have possessed the Foxy from Step Closer, whom cursed Pete to repeatedly get into close situations where he'd either lose his eye or his arm, such as a butcher knife falling and nearly missing his arm or a fishing hook to be picked up by the wind to scrape his cheek until, after his death, his eye and arm were the first parts to be taken due to his listing as an organ donor), Electricity Manipulation and possibly Corrosion Inducement (As the Stitchwraith, Andrew wanted to zap an unsuspecting man but instead ended up causing the man to wither to a husk on contact due to William's interference)

Attack Potency: Unknown as ghost, Street level (The Golden Freddy suit is filled with springlocks and broke Devon's arm after biting down on it) | Unknown, likely Street level (Shook the patient's body hard enough to crack rib bones and eventually caused the body to burst)

Stamina: Very High as a spirit

Range: Standard melee range, Tens of meters with powers (Could produce effects around the Fazbear Pizzeria location), Possibly several kilometers (Kelsey could travel several miles from the Fazbear location containing Golden Freddy) | Standard melee range, At least Hundreds of meters with powers (While possessing the patient, could cast illusions all across the hospital), possibly much higher (Ella could seemingly affect Delilah despite being in the garbage dump even after Delilah drove a long distance away), Possibly several kilometers

Intelligence: Below Average (Is a child and most of his memory is fuzzy or lacking)