VS Battles Wiki
Register
Don't have an account?
Sign In
Advertisement
in: Characters, Rayman, Game Characters,
and 30 more 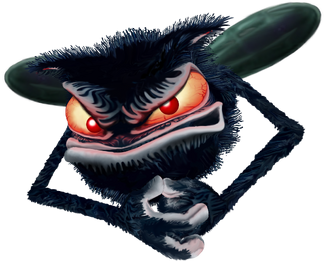 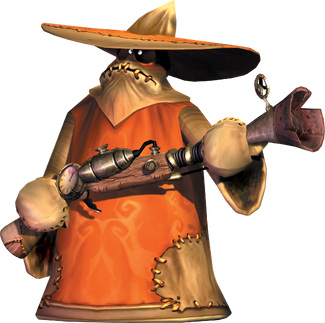 André (also known as The Dark Lum Lord) is one of the main antagonists in the Rayman video game series. He is the original Black Lum, the result of a Red Lum being frightened. He has the ability to corrupt other Red Lums into Black Lums by touching them; this is how he raised an army of Black Lums, which then became Hoodlums. He spends the first half of the game inside Globox's stomach after the latter accidentally swallowed him in the Fairy Council. Later, he joins forces with Reflux, fallen champion of the Knaaren, and together, they gain the power of the Leptys in the hopes of destroying Rayman and wreaking havoc throughout the Glade of Dreams.

Age: Predates the universe (as a Red Lum); at least a few days old (as a Black Lum in Hoodlum Havoc and Hoodlum's Revenge)

Powers and Abilities: Superhuman Physical Characteristics, Small Size (Type 1), Flight, Magic/Intangibility (Immaterial; Is a type of Lum which are considered "magical lights" or "powerful shards of energy"), Energy Manipulation/Duplication (Can use energy to multiply into more Black Lums), Corruption (Type 3; Can change other Lums into Black Lums; possibly is a form of empathic manipulation since Red Lums change into Black Lums through fear), Healing (He was formerly a Red Lum which is known for being a shard of vital energy used to heal; normal Black Lums have been shown to heal an injured Reflux as Hoodlums), Possession (His spirit possessed Globox in Hoodlum’s Revenge), Cloth Manipulation (Black Lums can possess animal hair as bodies they can control, which are called Hoodlums; laser washing powder can change clothes to battledress), Soul Splitting (Left a part of his spirit inside of Globox), Biological Manipulation and Power Mimicry (Transformed Globox into a clone of Reflux and was able to replicate the abilities of Base Reflux; created Hoodlums from Reflux’s body), Power Amplification (When him or his vessel drinks plum juice), Empathic Manipulation (Can make Globox crave plum juice), Expert Marksman

Attack Potency: At least Small City level, possibly Solar System level (Could harm Globox while inside of him. Should also be comparable to other Lums)

Lifting Strength: At least Class K (Comparable to Rabbids, who can move airliners), likely Class M (Comparable to Rayman, who set up a trap with a giant 50,000-ton weight), possibly Class Z (The Rabbids pulled the continents in Rabbids Invasion's opening sequence)

Range: Below standard melee range as a Black Lum. Tens of meters (as an armed Hoodlum)

Intelligence: Above Average (While Black Lums/Hoodlums are generally considered of low intelligence; André has manipulated Reflux in his desire for revenge to help him in his plans; knows how to create own vessels with Hoodlums; presumably knows how to make various weapons and vehicles such as the Armaguiddon)

Weaknesses: Not very powerful on his own and Black Lums are easily dispatched with regular attacks from Rayman. He needs other Lums or some sort of vessel (like a Hoodlum outfit, Globox, Reflux, etc.) to put up more of a fight. Is vulnerable to being reverted to a Red Lum through abilities like grimace, which is a form of purification and possibly empathic manipulation. Has an addiction to fermented plum juice