VS Battles Wiki
Register
Don't have an account?
Sign In
Advertisement
in: Tier 6, Information Users, Immortals,
and 28 more 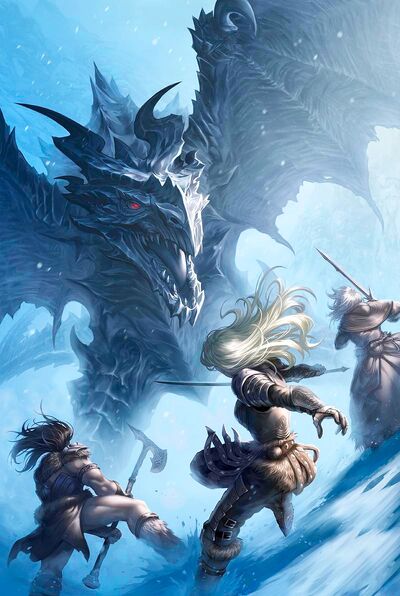 Ancient Tongues are three legendary Nordic heroes who first learned the arts of Thu'um from Paarthurnax. They led the humans against the dragons and Alduin during the Dragon War of the Merethic Era. Gormlaith Golden-Hilt, Felldir the Old, and Hakon One-Eye were the leaders of the rebellion against Alduin, and the first mortals to learn how to wield the Thu'um. Together, they fought against Alduin atop the Throat of the World. However, they were unable to defeat him, so they used an Elder Scroll to banish Alduin into the far future. Thousands of years later, the spirits of three heroes assisted the Last Dragonborn in the final battle against their nemesis in the realm of Sovngarde.

Gender: Felldir the Old, and Hakon One-Eye were Male. Gormlaith Golden-Hilt was Female.

Age: Unknown but they died in the Merethic Era, Immortal spirits in Sovngarde currently.

Attack Potency: At least Multi-Continent level (Each of them should be vastly above the Greybeards with their voices, who can shake the entire planet. They were taught by Paarthurnax himself, and were considered among the greatest Thu'um mortal users ever existed.), likely higher (They traded blows against Alduin, and yet they held off against the Dragon god very well), their Thu'um ignores durability to an extent.

Speed: At least Massively Hypersonic+ (Should be comparable to other Dragons such as Odahviing, who can fly across the entirety of Skyrim in under half a minute. Should be above mages who are capable of casting and reacting to shock spells that function identically to lightning)

Range: Planetary level with the Thu'um (They are vastly above the Greybeards who can affect the entire planet with theirs). Should be up to High Hyperversal non-offensively (Can travel from Aetherius to Nirn through the usage of Thu'um which is often from a Thu'um summoner (The Dovahkiin) on Nirn itself.)

Intelligence: Extraordinary Genius. They were the first mortals to learn the Thu'um from the Dragons. They were the legendary heroes who first mastered the arts better than any mortal on Nirn. They also invented the Dragonrend that can nullify immortality of dragons and even a God like Alduin.

Weaknesses: They are still mortals, and can be easily slain. 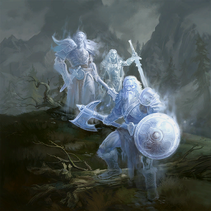 Three Heroes from Sovngarde can travel back to Nirn through the power of Thu'um.
Community content is available under CC-BY-SA unless otherwise noted.