VS Battles Wiki
Register
Don't have an account?
Sign In
Advertisement
in: Tier 9, Tier 9-B, Tier 9-A,
and 33 more 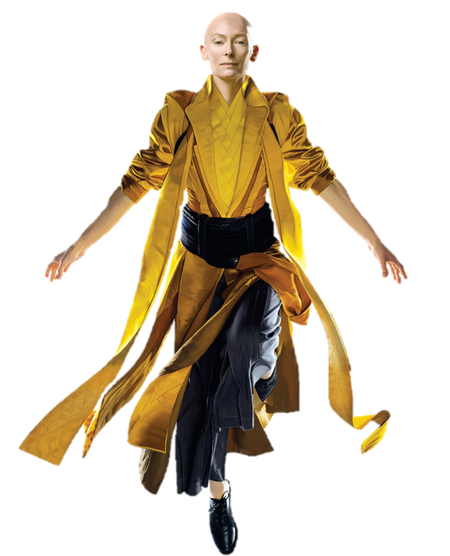 The Ancient One was the Sorcerer Supreme and leader of the Masters of the Mystical Arts. She taught Kaecilius, Karl Mordo, Wong, and many others in the ways of sorcery. Her unusually long life is fuelled by her energy use from the Dark Dimension, a technique she prohibits others from doing. When Kaecilius challenged the Ancient One's ways and stole a spell from the forbidden Book of Cagliostro, the Ancient One was determined to prevent Kaecilius from summoning Dormammu to the Earth.

Tier: 9-B physically, higher with Conjured Weaponry. At least 9-A with Magic, At least High 6-C with Sling Rings

Powers and Abilities: Peak Human Physical Characteristics, Genius Intelligence, Immortality (Type 1, Was granted eternal life by Dormammu), Self-Sustenance (Type 2), Martial Arts Mastery, Magic Mastery, Reality Warping, Space-Time Manipulation, Causality Manipulation (Can alter the timeline by drawing power from the Dark Dimension, splitting the timeline within the Universe in two based on specific events), Soul Manipulation, Energy Manipulation, Energy Projection, Astral Projection, Energy Weapons, Energy Barriers, Empowerment (Can draw in power from the Dark Dimension), BFR (Can trap people in the Mirror Dimension, a parallel dimension that mirrors the real world. Doctor Strange threw Loki into a portal and made him keep falling through dimensions for 30 minutes), Portal Creation and Dimensional Travel with a Sling Ring, Time Manipulation, Time Travel and Precognition with the Eye of Agamotto (As the Sorcerer Supreme she should have access to the Eye, which is capable of accelerating, reversing and looping time, and capable of affecting timeless beings. Doctor Strange saw into 14,000,605 possible alternate future timelines to discover a way of defeating Thanos, and she should be able to do the same. She's also capable of slowing down time even without the Eye and can see the future without it as well), Time Stop, Teleportation (Doctor Strange was shown to be able to effortlessly teleport both himself and those around him, and she should be able to do the same), Limited Time Travel (Even without the Eye of Agamotto, she can create splinters in reality from which she can astral project into, reaching into the future), Matter Manipulation & Transmutation (Doctor Strange transformed a teacup into a large glass of beer, and refilled the drink after Thor emptied it. He also transformed a "Black Hole" into a group of butterflies and she should be able to do the same), Duplication (Scaling from Doctor Strange), Power Nullification (Scaling from Doctor Strange. Split up Strange Supreme's timeline into two, removing much of his power), Resistance to Time Stop, Weapon Mastery, Air Manipulation, Power Absorption (Every Master of the Mystic Arts such as Strange and Mordo should have Power Absorption as Mordo stripped Jonathan Pangborn's power), Mind Manipulation (Sorcerers are trained to fortify their minds against those trying to invade it)

Attack Potency: Wall level physically (Superior to multiple other amped wizards. Should be comparable to her durability), higher with Conjured Weaponry. At least Small Building level with Magic (Casually defeated Kaecilius, who was amplified by the Dark Dimension. As a Sorcerer Supreme, she is one of the most powerful magic users of all time. Effortlessly destroyed Chitauri Chariots), At least Large Island level with Sling Rings. She can negate durability through disembodying

Speed: Sub-Relativistic (Superior to Doctor Strange. Can react to a magic arrow that can cross hundreds of meters within seconds), higher with Time Slow (Perceived lightning in slow motion)

Durability: Wall level physically (Survived a fall from a skyscraper while stabbed), At least City level with shields (Should be comparable to other sorcerers, who could shield attacks from the Sanctuary II)

Range: At least several meters with most attacks, Kilometers with Reality Warping, Multiversal+ with portals

Intelligence: Genius. The Ancient One was an incredibly skilled and talented sorceress whose powers were sharpened and perfected over her 700 years of life. Had access to and likely read every book of magic in Kamar-Taj's library, including ancient and advanced tomes, which would make a lesser mage go insane upon trying to read it. She was not afraid to step beyond her own teachings and explore esoteric, forbidden, and dark schools of magic to further increase her abilities.