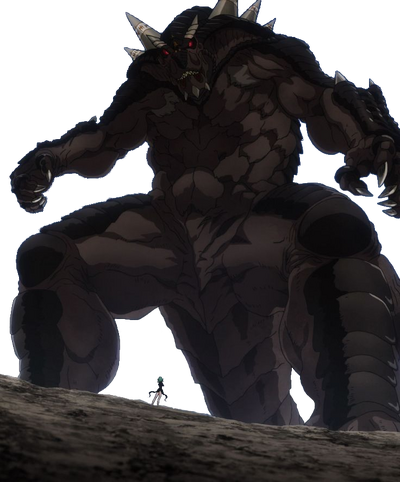 The Ancient King (古代王, Kodaiō) was the king of the Terror Lizard Clan, he is also an anime only monster.

The Ancient King awakened after 300,000,000 years of slumber, which was used to wait for the other kings to be taken out. He was attacked by military forces, but the missiles proved to be ineffective against the Terror Lizard's skin. The Hero Association deployed Tatsumaki to take care of the threat.

After a brief conversation with Tatsumaki, he's killed by a meteor brought from space by her with the use of her telekinetic powers.

Powers and Abilities: Superhuman Physical Characteristics, Large Size (Type 2), Breath Attack, Energy Projection (Can fire a beam of energy out of his mouth)

Attack Potency: Unknown (The Hero Association considered him enough of a threat to justify calling in Tatsumaki to deal with him. Casually obliterated the mountain he hibernated in when he awakened)

Durability: Unknown (Was totally unscathed after being hit with several missiles. He claimed that it would take a meteor to kill him)