VS Battles Wiki
Register
Don't have an account?
Sign In
Advertisement
in: Tier 6, Tier 6-C, Unknown Tier,
and 22 more 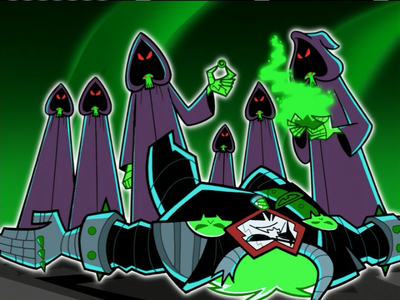 The Ancient Ghosts are a group of powerful, old ghosts who banded together in a last-ditch effort to defeat the Ghost King, Pariah Dark. After defeating Pariah Dark, the group sealed him within the Sarcophagus of Forever Sleep and separated the Ring of Rage, Crown of Fire and the key to the sarcophagus. It is unknown what happened to them after they defeated Pariah.

Powers and Abilities: Superhuman Physical Characteristics, Ghost Physiology (Have all the standard powers and abilities of a ghost), Energy Manipulation (Can project their ectoplasmic energy in the form of destructive energy beams[1])

Attack Potency: At least Island level (Six defeated Pariah Dark with their energy blasts while he was wearing the Ring of Rage and Crown of Fire,[1] seven of them obliterated the majority of Pariah's keep with their energy beams[1])

Speed: At least Massively FTL combat and reaction speed (Fought Pariah Dark at his stronget, who is comparable to Ecto-Skeleton Danny Phantom, who in turn is a hundred times faster than when he moved quicker than and dodged a ghost ray,[2] which are considered lightspeed)