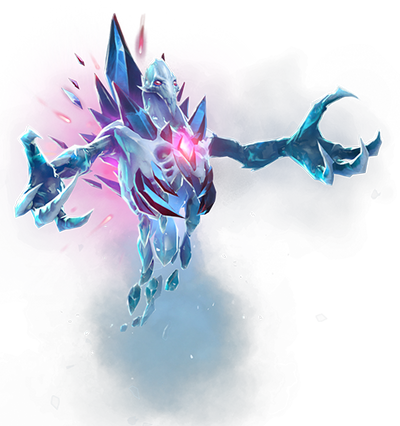 Kaldr, the Ancient Apparition, is an image projected from outside time. He springs from the cold, infinite void that both predates the universe and awaits its end. Kaldr is, Kaldr was, Kaldr shall be… and what we perceive, powerful as it appears to us, is but the faintest faded echo of the true, eternal Kaldr. Some believe that as the cosmos ages and approaches its final moments, the brightness and power of Kaldr will also intensify—that the Ancient Apparition will grow younger and stronger as eternity's end draws nigh. His grip of ice will bring all matter to a stop, his image will cast a light too terrible to behold. An Apparition no longer!

Projected from the cold, infinite void, the Ancient Apparition known as Kaldr is but a faint image of his true self. Nevertheless, his Chilling Touch is enough to crack the sturdiest of armors. Caught in an Ice Vortex, heroes afflicted with Cold Feet seldom go far. A frozen sphere flies across the sky, expanding at its destination. Within seconds, an Ice Blast strikes the marked area. Flash frozen, enemies have no choice but to retreat before their brittle bodies shatter to pieces...

Gender: Appears to be male

Attack Potency: Unknown | Unknown (The projection of Kaldr seen in the physical world is nothing but a faint, fading echo of his true form)

Range: Tens of meters with spells, Universal at full power

Retrieved from "https://vsbattles.fandom.com/wiki/Ancient_Apparition?oldid=6578711"
Community content is available under CC-BY-SA unless otherwise noted.