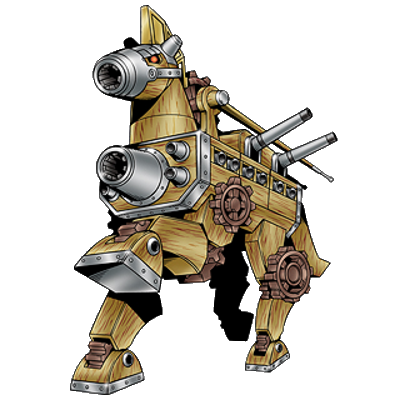 AncientTroiamon is the Legendary Warrior possessing the attribute of "Wood", it is one of the legendary Ten Warriors Digimon that saved the ancient Digital World. An Ultimate who existed only in the distant past, it boasts of the greatest size among the Ancient Digimon. Various mechanisms are set within its body, and it displays tricky attacks and movements. AncientTroiamon's abilities were later passed on to the "Plant Digimon".

Attack Potency: At least Galaxy level (The Warrior Ten are naturally stronger than normal Mega level Digimon. Should be comparable to AncientMermaidmon. Aided in the fight against Lucemon)

Speed: FTL (Comparable to the other Warrior Ten)

Intelligence: AncientTroiamon should be a very talented fighter and was skilled enough to aid in the fight against Lucemon. His experience level should be on par with the other Warrior Ten.

Overwrite: All Digimon can rewrite their data, so that they are able to react to various situations that were once problematic for it. This usually causes a gigantic increase in power, durability, speed and sometimes new skills and resistances to be gained. However, the more emotional the Digimon is, the more violent the overwrite becomes and thus can lead to negative effects. In AncientTroiamon's case it has this ability to a ridiculous level allowing reactions to the emotions to be much faster and guarantee a much greater power increase than most Digimon can reach in a shorter period of time.

Start a Discussion Discussions about AncientTroiamon