VS Battles Wiki
Register
Don't have an account?
Sign In
Advertisement
in: Tier 3, Tier 3-C, Digimon,
and 48 more 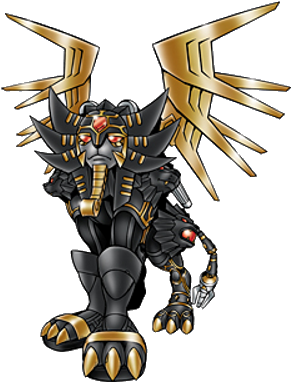 Possessing the attribute of "Darkness", AncientSphinxmon is one of the legendary Ten Warriors Digimon that saved the ancient Digital World. A Mega who existed only in the distant past, it is set at the opposite extreme to Ancient Garurumon as a being born from darkness. It rules over the destruction and annihilation of all existing or living things, and is feared as the "Deadly Dark Beast". Ancient Sphinxmon's abilities were later passed on to the "Mythical Beast" and "Demon Beast Digimon".

Intelligence: Dobermon and Cerberumon seem quite bestial in combat, however they are fierce combatants. Dobermon naturally hunts Virus Digimon on a daily basis while taking them down showcasing its hunting skills. Cerberumon is able to guard the Dark Area from multiple threats meaning it would need to be a skilled fighter and hunter.