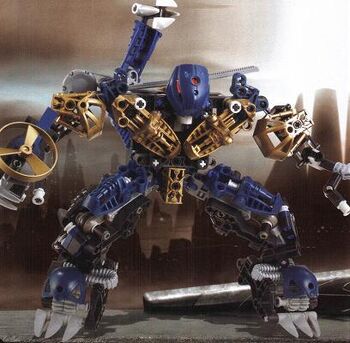 Ancient was one of the oldest Dark Hunters, and The Shadowed One's most trusted agent after Sentrahk. It was Ancient who inspired the Dark Hunters, being the first to reject the codes of behavior on his and The Shadowed One's home island and to sell his services to anyone in his species who wanted them. This transformed the peaceful society into a war-torn one, as warlords wanted Ancient to crush their enemies.

Ancient and Voporak were sent to find the Mask of Time about the same time the Piraka were on Voya Nui. They realized that the Vahi was in Metru Nui and that Dweller was already on a mission there. Ancient left for Odina to oversee the reconstruction of the base and to wait for Lariska's return from her mission. He received a coded message telling Ancient to do his duty as an Order of Mata Nui member: to convince The Shadowed One to side with the Order or kill him. He managed to do his job without revealing his affiliation with the Order. Ancient was recently with The Shadowed One to eliminate the Vortixx on Xia in order to stop them from making weapons for the Brotherhood of Makuta. His mission ended when The Shadowed One disintegrated him to keep Makuta Kojol's virus a secret.

Age: Several thousand years old (described as one of the oldest Dark Hunters)

Powers and Abilities: Superhuman Physical Characteristics, Limited Flight (Ancient could hover at will via Levitation disks in his feet), Sense Manipulation (His Rhotuka spinners caused targets to lose all physical coordination), Longevity

Attack Potency: Island level (Comparable to The Shadowed One, who can fight on par with Teridax).

Durability: Island level (Was described as having "near-impenetrable" armor)

Stamina: Extremely high. Comparable to The Shadowed One who is comparable to Toa and the Toa Mangai fought against the Kanohi Dragon for an entire month.

Intelligence: Ancient is a highly intelligent and experienced warrior and assassin. He also convinced The Shadowed One to side with the Order of Mata Nui without revealing that he was a member of the organization.

Retrieved from "https://vsbattles.fandom.com/wiki/Ancient?oldid=5735630"
Community content is available under CC-BY-SA unless otherwise noted.