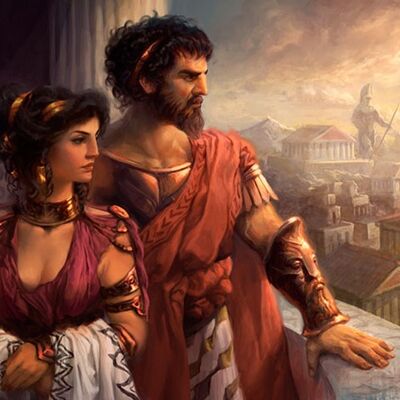 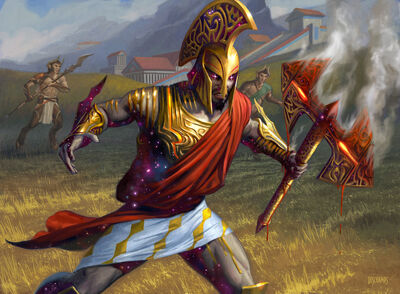 Anax was the legendary king of Akros on Theros, a brilliant tactician and warrior. He was the husband of Cymede. Anax is a burly man in his late 40s, once a follower of Iroas. In his later years he has turned to Purphoros as he steers his people through the creation of a small empire. This shift is reflected in the trend in art now seen from Akroan artisans. Swords and armor are now decorated. Pottery, clothing, wall paintings, and weaving show ancient Akroan patterns and symbolism handed down for generations. To his people, Anax is a great leader to be followed without question. To other poleis, he is known as a skilled tactician and heartless killer.

All previous abilities plus Reactive Power Level (His power increases the more Red mana is present in any form), Heat Manipulation, and Summoning (Able to summon Saytrs)

Attack Potency: At least Wall level (Fought and nearly defeated Rhordon the Rageblood, forcing Mogis to grant Rhordan a boon to save him. Should be physically comparable to Akroan soldiers capable of fighting Minotaurs, Cyclopses, Harpies, Returned, and Leonin. Should be at least as strong as if not stronger than Lanathos, who was able to physically overpower a Bull with his bare hands) | At least Island level, likely higher (Should be comparable to other Demigods such as Daxos and Tymaret), higher with Devotion (His power increases the more Red mana is present in any form)

Speed: Unknown | Likely Massively Hypersonic Reactions and Combat Speed (Should be comparable to the other Demigods)

Intelligence: Gifted (As the leader of Akros, the polis that prides itself on the value of strength and combat prowess, Anax is a highly skilled fighter and military tactician. His skill on the battlefield is widely renowned by his people and his enemies alike, with even Elspeth recognizing him as a master of swordplay, able to make precision strikes to make full use of incapacitating or killing his opponent's as well as demonstrating the knowledge to use the rage or larger size of his opponents against them. Anax is also highly skilled in grappling and wrestling, with extensive knowledge of locks and holds that can instantly dislocate joints, break bones, and even instantly cripple an opponent for life.)

Weaknesses: Has an inferiority complex due to his height 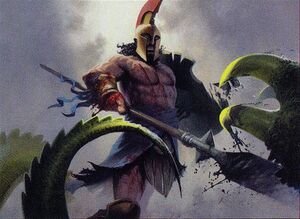 Retrieved from "https://vsbattles.fandom.com/wiki/Anax?oldid=6320064"
Community content is available under CC-BY-SA unless otherwise noted.