VS Battles Wiki
Register
Don't have an account?
Sign In
in: Characters, DC Extended Universe, Warner Bros.,
and 20 more 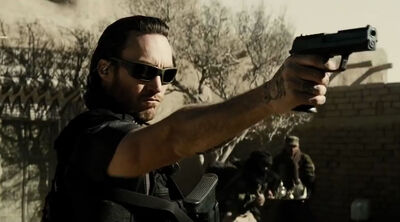 Anatoli Knyazev (born February 24, 1975) is a Russian weapons and human trafficker who was employed by Lex Luthor.

He is a ruthlessly cruel man, completely obedient to the orders of his employer Lex Luthor, being more than willing to commit atrocities (such as to indirectly murder Cesar Santos, directly murder Kahina Ziriand many other Nairomians, as well as to burn Martha Kent alive) if ordered by the latter to do so.

Range: Standard Melee Range, up to Hundreds of Meters with weapons