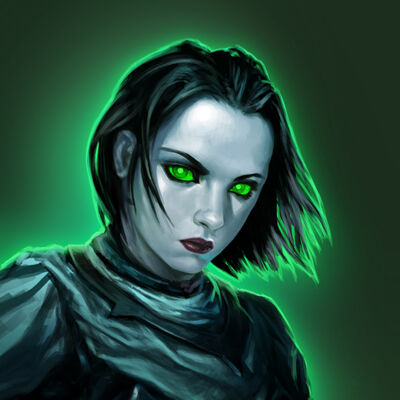 Anastasya is one of Slava's youngest children, along with Kiril. However, someone controlled her mind, forcing her to kill her father. After that, she was executed by her own brother, Anton, to spare her from the Inquisitions wrath. Later, she was raised from the dead by the Necromancer Sveltana, her great aunt.

Weaknesses: She is unable to use fire and light magic, require army, Can be manipulated easily(formerly), and is limited to mana.

Clearing her name after being forced to kill her father

Defeating Archangel Uriel in battle in his own mind

Becoming a member of the Shadow Council

Note: Powers and abilities that are listed may differ (most of them depend on player choices)

Retrieved from "https://vsbattles.fandom.com/wiki/Anastasya_Griffin?oldid=4599025"
Community content is available under CC-BY-SA unless otherwise noted.