VS Battles Wiki
Register
Don't have an account?
Sign In
Advertisement
in: Tier 9, Tier 9-A, Tier 4,
and 35 more 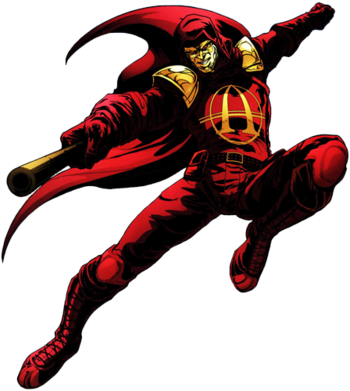 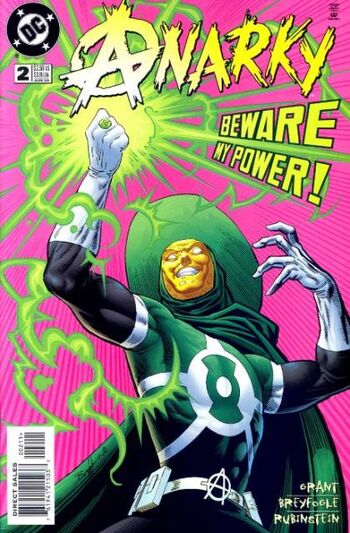 A possible child of the Joker and Linda Penman, Lonnie Machin was a prodigal high school student until influence from anarchist philosophy turned him into the aptly-named vigilante Anarky. Though he was taken down by Batman and sent to a juvenile detention center, he soon escaped to become a consistent adversary to both the Batman and the criminals of Gotham City.

Powers and Abilities: Superhuman Physical Characteristics, Genius Intelligence, Martial Arts, Weapon Mastery, Stealth Mastery (Snuck into a heavily guarded senator's house. Spray painted his symbol onto Batman's cape without him noticing), Hacking, Forcefield Creation, Electricity Manipulation with baton, Illusion Creation with holograms, external Transformation (Can turn Etrigan back into Jason Blood) and Summoning (Summoned a demon from Hell) via Magic, Mind Manipulation with quartz crystal (Hypnotized a demon), Portal Creation via Boom Tubes, Negation of Mind Manipulation (Has an "anti-hypnotism disk", and a machine that can undo brainwashing) | Same as before in addition to Flight, Supernatural Willpower, Energy Manipulation and Absorption, Weapon Creation, Reality Warping, Physics Manipulation, Law Manipulation, Existence Erasure, (Can change reality by manipulating Planck length and rewrote the laws of physics to stop the Aberration from existing), Matter Manipulation, Mathematics Manipulation (Manipulated mathematical concepts such as the length of a Planck length)

Attack Potency: Small Building level+ (Can trade blows with Batman) | Solar System level (Broke through one of Kyle Rayner's energy constructs, should be comparable to other Green Lanterns)

Speed: At least Supersonic+, possibly Hypersonic+ (Kept up with Green Arrow and reacted to his arrows in mid-air) | Massively FTL+ via powerscaling

Lifting Strength: Peak Human (Lifted Scarecrow with the help of Batman even after being weakened by fear toxin) | Class K (Lifted a collapsing building), likely Stellar (Should be comparable to other Green Lanterns, whose constructs can physically restrain Kryptonians)

Durability: Small Building level+ (Withstood attacks from Batman and Tim Drake, tanked an attack from Doleman, who can obliterate a concrete pillar), higher with forcefield and Universal Power Suit | Solar System level (Took hits from Kyle Rayner), likely far higher with forcefield (Took attacks from a monster that broke down the laws of space-time)

Stamina: Peak human (Can hold his breath for 4 minutes.) | Higher

Intelligence: Genius. Anarky is a highly intelligent hacker, mechanic, engineer, marksman and entrepreneur who can think 10 times faster than an ordinary person and is considered one of the smartest men on Earth by military masterminds. Knows dozens of martial arts styles, including Karate, Kung Fu, Aikido and Jiu-Jitsu. Can read lips. Can hotwire a bulldozer. Can pick locks.