VS Battles Wiki
Register
Don't have an account?
Sign In
Advertisement
in: Characters, Female Characters, Adults,
and 28 more 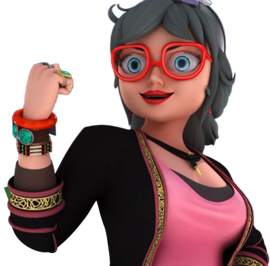 In the episode "Captain Hardrock", after Roger Raincomprix bans her from playing in the National Music Festival, she is Akumatized by Hawk Moth into Captain Hardrock, a music pirate supervillain.

Superhuman Physical Characteristics, Vehicular Mastery (Have a complete control over her ship and can command it to do whatever she wants), Expert Hand-to-Hand combatant, Acrobatics, Expert Cutlass user, Explosion Manipulation (with her cannons), Energy Projection (with her lasers), Can command her ship to fire chains to trap people at will, Can fire cannonball-shaped speakers which seem to act as white noise machines, Limited Magnetism Manipulation (Can command her compass to point to any direction she wishes in order to freely navigate the ship, despite compasses usually point to the north. It doesn't work when there's a metallic object nearby) Immortality (Type 6); Duplication, Paralysis Inducement, Power Bestowal, Possession, Corruption and Mind Manipulation (If her Akuma isn’t purified after being defeated, it would start to multiply into many more Akumas and infect different persons, turning them into Captain Hardrocks that would remain immobile until Anarka gets Re-Akumatized)

Speed: At least Peak Human (Comparable to Alya and Nino) | At least Supersonic+ with Massively Hypersonic+ combat and reaction speed (Comparable, if not faster than The Mime and can keep up with Season 2 Ladybug and Cat Noir)

Lifting Strength: Average Human | Class G (Should be comparable to other akumatized villains)

Striking Strength: Wall Class | Town Class (Should be comparable to other Akumatized Villains)

Standard Equipment: Akumatized ship compass (hard to locate since the entire ship got akumatized). Microphone which doubles as a laser cutlass and can also turn into a spyglass.

Weaknesses: Using a metallic object near her compass makes it go crazy and renders her control over the ship useless. If her ship gets on the ground, then it will remain stuck there. Her powers will be lost if her ship compass has been destroyed, though the Akuma inside of it is able to multiply and can return her powers once feeling negative emotions again unless purified

Captain Hardrock usually travels around in her ship, and can command her ship to travel in any direction at her will. She can also order her ship to either blast cannons at her enemies, and in case they're on her ship, she can command the ship to send cables to tie them or attack them physically with her cutlass.