VS Battles Wiki
Register
Don't have an account?
Sign In
Advertisement
in: Tier 8, Tier 8-A, Tier 5,
and 41 more 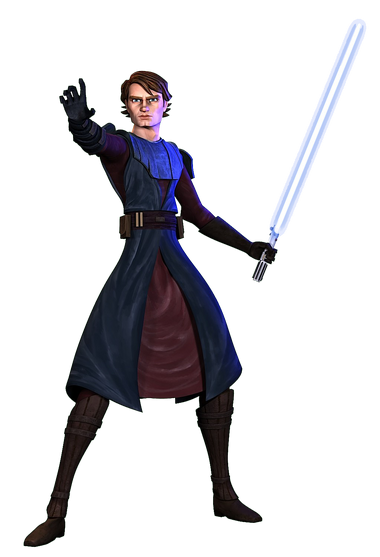 Anakin Skywalker is a Human Jedi Knight and the Chosen One destined to balance the Force. Born to a slave on Tatooine through Darth Plagueis' manipulation of the Force, Anakin had a gift of unprecedented potential in the Force. Discovered by Jedi Master Qui-Gon Jinn and his Padawan, Obi-Wan Kenobi, Anakin expressed his desire to become a Jedi, eventually being accepted into the Order despite the reservations of members of the Jedi Council, including Jedi Grand Master Yoda and the similarly respected Mace Windu. He later became a legendary hero of the Clone Wars, taking on the young Togruta Ahsoka Tano as a Padawan and leading Republic forces to many victories alongside his Master, Obi-Wan.

However, the war took its toll on the Jedi Knight, and his fears of loss and separation from his loved ones allowed Darth Sidious to turn Anakin to the Dark Side. This led to the downfall of the Jedi Order, with Anakin slaying many Order 66 survivors and younger Jedi trainees under Sidious's orders. The young Skywalker then had his climactic battle with his former Master on Mustafar but was ultimately defeated and left to die. Sidious, however, saved his new apprentice, equipping Anakin's wounded body with the life-support system and helmet that would become emblematic of his later identity, Darth Vader.

Name: Anakin Skywalker, The Chosen One, The Hero With No Fear, Skyguy

Age: Around 22 when he becomes Darth Vader

Speed: Subsonic running speed with Force Speed (Has chased after an enemy fleeing on a speeder bike, which has top speeds in the range of 160 to 360 km/hr. He should be far superior to Padawan Kenobi, who has run at such speeds aboard the Saak'ak that he was a blur. Explicitly stated to move at such speeds that he was a blur during his & Thrawn's mission to Batuu), Massively Hypersonic+ combat speed and reactions augmented by precognition (Should be comparable if not superior to the likes of Kit Fisto. Has repeatedly proven himself capable of matching Dooku in combat) | Subsonic running speed with Force Speed, Massively Hypersonic+ combat speed and reactions (Faster than before) | Relativistic (Able to keep up with Obi-Wan). FTL reactions and combat speed (Capable of keeping pace with Count Dooku and Obi-Wan. Has repeatedly deflected blaster bolts, which move at the speed of light)

Lifting Strength: Peak Human naturally. Superhuman with Force Amplification. Class M with telekinesis (Comparable to Dooku and far superior to Kanan Jarrus) | Peak Human. Superhuman with Force Amplification (Stronger than Ventress, who rolled a large stone pillar off of herself). Class G with telekinesis (Telekinetically manipulated a large spaceship. Should be superior to Padawan Rivi-Anu, who, while injured and exhausted, briefly held up a Venator-class star destroyer [a heavy cruiser class warship whose mass should be several to tens of millions of tonnes])

Range: Extended melee range with a lightsaber. Tens of meters with Force powers. Likely interstellar with Force senses (Should be comparable to the likes of Obi-Wan and Ventress, who were able to sense when he had left the Teth planetary system, and are capable of sensing danger from light-years away) | Extended melee range with his lightsaber. Tens of kilometers with telekinesis (Should be comparable to the likes of Saesee Tiin, who could telekinetically hurl B2 super battle droids up to 4 km away), likely Interstellar with telepathy and Force senses.

Intelligence: Mechanical and technical genius, built an advanced droid and a pod racer when he was 9, designed custom starfighters and other devices, master starfighter pilot, skilled and experienced combatant. Unorthodox, yet brilliant, tactician and strategist.

Weaknesses: Arrogance and fear for the lives of those he loves led to his ultimate corruption into Darth Vader, drifts towards the Dark Side when angered, making him very impulsive.