VS Battles Wiki
Register
Don't have an account?
Sign In
Advertisement
in: Tier 7, Tier Low 7-B, Characters,
and 69 more 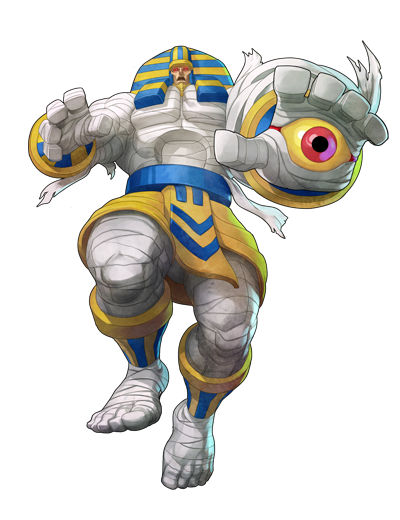 Anakaris is a video game character in Capcom's Darkstalkers fighting game series, first appearing in Darkstalkers: The Night Warriors. Pharaoh Anakaris was the wise ruler of a large kindgom in Egypt, 5000 years ago. Upon his death, his remains have been entombed into a pyramid, in order to preserve them and allow him to ascend to godhood. However, after the pharaoh's death, the kingdom quickly fell to ruin.

Anakaris came back to life as a side effect of Pyron's arrival on Earth. After his awakening, he realized that he was no longer mortal and had acquired new powers. Seeing that nothing have remained of his kingdom, Anakaris departed with the intent of reestablish the former glory of his realm. Eventually, Anakaris managed to travel back in time and save his people from the approaching enemy.

During the events of Darkstalkers 3, Anakaris was dragged into the Majigen by Jedah's power, calling him from the future. In the end, Anakaris made up his mind, and decided to move his kingdom and his people to a different dimension, in order to save them from the destruction that the human race would have brought upon the world.

Age: Over 5000 years old, over 10000 chronologically (Due to the time spent before resurrecting)

Powers and Abilities: Superhuman Physical Characteristics, Immortality (Type 1, 3 and 7; Resurrected as a mummy and gained eternal life), Magic, Skilled hand-to-hand combatant, Cloth Manipulation (Capable of controlling the bandages on his body to jab or wrap-up the opponent), Enhanced Senses (Possesses multiple eyes all over his body), Extrasensory Perception (Able to sense relevant sources of energy, such as Pyron's waves. Sensed Jedah's will in the future), Non-Physical Interaction (Able to interact with Pyron, who doesn't have a physical form, and with Bishamon in Vampire Savior, whose body is made of souls), Regeneration (Low-Mid; Able to instantly regenerate the lower half of his body if split and/or destroyed, as seen in his attack "Pharaoh Split"), Transformation (Can take his previous human form), Shapeshifting (Can turn his body into a sarcophagus, his arms into snakes, his lower half into a pyramid and change the appearance of his face), pseudo Density Manipulation (His weight varies depending on the shape he takes), Body Control (Can split his body in half, retract it, open it, make his limbs appear from the ground and un-wrap his legs and use them as springs during a jump), Duplication (Can multiply his arms), Elasticity (Able to elongate his arms and legs), minor Shadow Manipulation (Can extend his limbs through his shadow), minor Fusionism (His servant Khaibith is part of him and lives inside his body. He is also able to return even if destroyed), Hovering, Creation (Can create coins), minor Breaking the Fourth Wall (Recommends a defeated opponent to buy an official strategy book), Power Mimicry (Can swallow and copy enemy projectiles via Kotogama Daeshi), Teleportation (Via Warp), Portal Creation, Dimensional Travel (Moved his kingdom to another dimension), Telekinesis (Used to move pyramids and buildings through a portal), Time Travel (Able to travel to the past and to the future), Existence Erasure/BFR (Erased/Made disappear an opponent army), Soul Manipulation (Every Darkstalker is able to collect the souls of defeated enemies and use them for a variety of purposes, such as absorbing them to become stronger and he did so during the first game), passive Aura, Corruption (Type 2) and Madness Manipulation (Type 2) (All the Darkstalkers give off an aura that corrupts the heart of the opponents and drives them insane), Summoning (Can summon falling sarcophagi and meteors, servants and even his wife), Elemental Manipulation (Fire, lightning and ice), limited Precognition and Resurrection (Correctly foresaw his death and resurrection), Astral Projection (Projected his figure in the sky and is able to manifest hieroglyphs in the air), minor Petrification, Poison Manipulation and Transmutation (Petrification, poisoning and transmutation are part of some of his attacks), Resistance to Soul Manipulation (Possesses a very strong soul, due to it being directly connected to his power. Souls such as his own, if splitted in multiple parts, are able to draw each piece to the other and return one), Corruption (Type 2) and Madness Manipulation (Totally unaffected by the aura of other Darkstalkers)

Attack Potency: Small City level (Moved the kingdom of Egypt to another dimension by pulling it down through the desert)

Speed: At least Supersonic+, likely higher (Able to keep up in close combat with characters such as B.B. Hood and Huitzil, both of which make large use of guns and various types of firearms)

Lifting Strength: Class T (Able to move the entire kingdom of Egypt with his powers)

Striking Strength: Small City Class (Comparable to his attack potency. The physical strength of the Darkstalkers is equivalent to the power of their soul, which is the same they draw for their special abilities)

Durability: Small City level (Capable of taking blows from other Darkstalkers in his class)

Stamina: High (Able to engage in combat with other Darkstalkers on his level. Likely fought many opponents in a rather limited period when he was dragged into Majigen)

Range: Standard to extended melee range with his body, several meters with projectiles, tens of meters to hundreds of kilometers with various abilities.

Intelligence: High. Anakaris was the pharaoh of a wide kingdom, that expanded throughout Egypt and over the Nile valley. He governed with wisdom, bringing his kingdom to prosperity. Anakaris also ordered the construction of a pyramid where entomb his body after death, foreshadowing his resurrection thousands of years later. Anakaris is also a skilled fighter, being able to control his body in a variety of ways and use his magic powers to cast spells and curses. Anakaris emerged as one of the most prominent fighters among the Darkstalkers during the events of both games, and eventually managed to save his kingdom from collapse and rule it in prosperity for eternity.

Weaknesses: He can only mimic one projectile at a time with Kotogama Daeshi. A strong mind/spirit can resist the madness-inducing effect of his aura and a dark heart can resist the corruption. It is possible that his Existence Erasure/BFR works only on weaker enemies, like human soldiers.

Note: All the references not included in this profile are provided on the verse page. 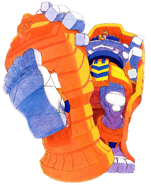 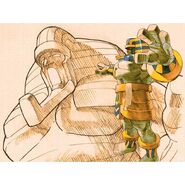 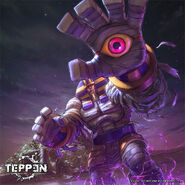 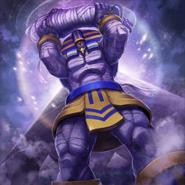 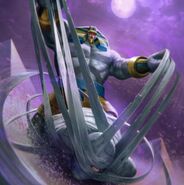 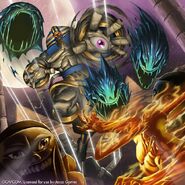 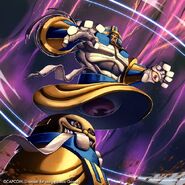 Profile from the Darkstalkers Graphic File