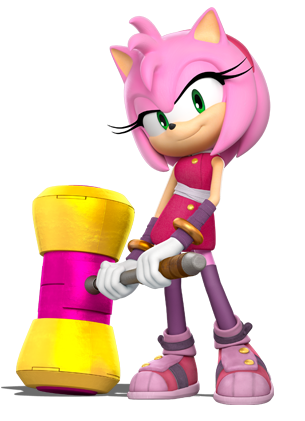 Amy Rose the Hedgehog is one of the main characters in the Sonic Boom subseries. She is an anthropomorphic hedgehog and the organizer, archaeologist and overall backbone of Team Sonic, a heroic group devoted to defending the peace of their world.

Attack Potency: Town level (Comparable to Sonic and Knuckles. Can damage Lyric with her blows)

Speed:  Massively Hypersonic (She can keep pace with Sonic)

Standard Equipment: Her Hammer, her Communicator which enables Fire/Ice Mode and can generate her Enerbeam.

Intelligence: Gifted. Amy is a highly skilled combatant who utilizes masterful proficiency when wielding her hammer. She supplements her combat skills with her acrobatic prowess, easily capable of executing impressive physical feats, such as performing body flips, balancing perfectly on beams and walking across them, and landing safely from large falls with fluidity and grace. She is a quick thinker and tactician of considerable intelligence. Amy's reflexes are sharp enough to let her detect incoming attacks outside her field of vision. Additionally, Amy has studied the legends and lore of her mysterious world and has useful knowledge of the ancient areas that aid her and her Team during exploration

Weaknesses: Many of her attacks require use of her hammer, which puts her at a disadvantage if she is disarmed

Retrieved from "https://vsbattles.fandom.com/wiki/Amy_Rose_(Sonic_Boom)?oldid=6960672"
Community content is available under CC-BY-SA unless otherwise noted.