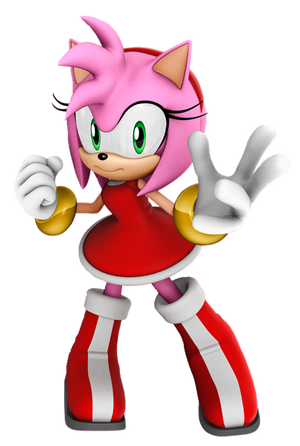 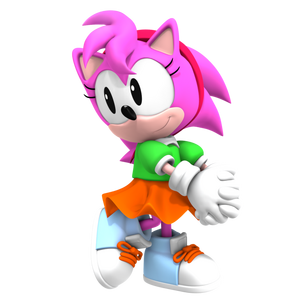 Superhuman Physical Characteristics, Self-Sustenance (Type 1), Skilled Hand to Hand Combatant, Regeneration (Mid. Can survive being crushed flat), Natural Weaponry (Through sharpening her spines), Weapon Mastery (With her Piko Piko Hammer), Vehicular Mastery (Drives a talking car in Sonic Drift), Can summon a massive hammer from seemingly out of nowhere which she can use for various attacks, Statistics Amplification (Can increase the speed of her attacks via Hyper Mode), Forcefield Creation (via barriers), Non-Physical Interaction (Can tag the Hyudoros, Boos, and King Boom Boo), Size Manipulation (Capable of shrinking opponents with her hammer by striking them), Clairvoyance & Curse Manipulation (Can use tarot cards to predict the future and lay curses on opponents), Resistance to Extreme Cold, Cosmic Radiations, Extreme Heat

Same as before, Acrobatics, Healing (Can heal by simply thinking of Sonic), Durability Negation (The Ichikoro Gauge allows Any to knock out the opponent in one hit once enough energy is transferred to it), Limited Instinctive Reaction (The Homing Attack is an automatic body movement that makes the user instinctively crash into an opponent's weak point), Can jump into the air and hit opponents with a homing attack, Invisibility, Can create tornadoes, Temporary Flight, Forcefield Creation (Of fire and electricity varieties), Invulnerability (With the Invincibility Monitor).  Resistance to Extreme Heat (Can survive the heat of falling directly into a star), Death Manipulation (Can traverse through areas near Void and can interact with him, in which his presence alone killed off the life within the Nature Zone before it was restored)

Status Effect Inducement with Amy Flash and Resistance to it (With the Immunity Idol), Statistics Amplification (With Speed Shoes, Golden Gloves and Speed Bar), Elemental Manipulation (Of Water, Electricity, Ice, Wind, and Earth varieties via elemental Rings), Fear Inducement (With the Spooky Charm), Resurrection (With Angel Amulet and Ring of Life), Life-Force Absorption (With Nocturne Blade), Transmutation (Via Ring Time), Paralysis Inducement (Via Stun), Gravity Manipulation and Psuedo-Black Hole Creation (With the Ark of the Cosmos), Purification (Type 3 with Cure All Spray). With Chao: Statistics Amplification (With Cheezlet and Blayze, attacks do much more damage), Damage Reduction (With Velk and Gibber, damage from attacks are greatly reduced), Healing (With Stebsly and Joy, vitality is regenerated over the course of a fight), Resurrection (With Ovus, their partner is automatically brought back up to three times in one battle), Probability Manipulation (With Koolet, Belgog, Fimbley, and Stugs, enemy attacks have a greater chance of missing. Churdle and Oldarg give a higher chance of hitting the opponent. Keroyo increases the chance of an enemy fleeing. Spartoi grants a chance to instantly knock out the opponent with every attack done), Shield Creation (Can make passive shields of fire, water, wind, lightning, and earth that stay even after being hit), Elemental Manipulation (Can imbue her attacks with fire, water, wind, lightning, earth, and ice), and Damage Transferal (With Pooki, damage taken is split between teammates). With Forcejewels: BFR, Barrier Creation (Can create barriers for a limited amount of time that others can't pass), Teleportation (Can teleport others to himself, teleport himself to others, swap places with an opponent, or teleport himself or others to a random location), Body Puppetry (Can force an opponent to move or use their items)

Attack Potency: Large Planet level (Capable of fighting the likes of Classic Sonic and Classic Knuckles in Sonic the Fighters) | Large Planet level (Stronger than her Classic self. Destroyed ZERO and fought Adventure Sonic, Tails, and Knuckles, presumably to a standstill, alongside the rest of Team Rose) | Small Star level (Capable of competently fighting alongside Sonic)

Lifting Strength: Class 10 | Class M (Slightly comparable to Sonic and was one-fourth of the necessary force to halt the Riot Train, a massive locomotive) | At least Class M

Range: Extended melee range with her hammer. Tens of meters with tornadoes

Intelligence: At least Average, Gifted in combat (Skilled with her Piko-Piko Hammer and can fight both against and alongside Sonic competently)

Weaknesses: Amy is somewhat short-tempered and moody, and is obsessed with Sonic to the point of being nearly rabid 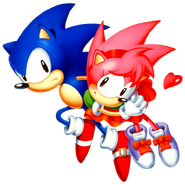 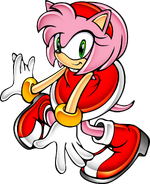 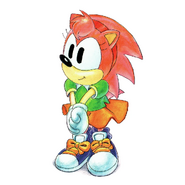 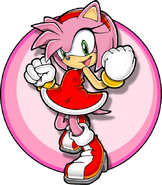 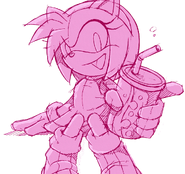 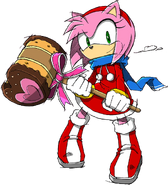 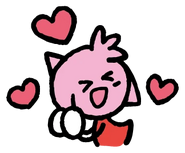 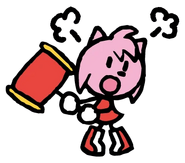 My Sweet Passion by Nikki Gregoroff (Theme of Amy)

A Thrilling Fortune Telling, written in the Sonic Comic