VS Battles Wiki
Register
Don't have an account?
Sign In
Advertisement
in: Tier 7, Tier Low 7-C, Tier 7-A,
and 21 more 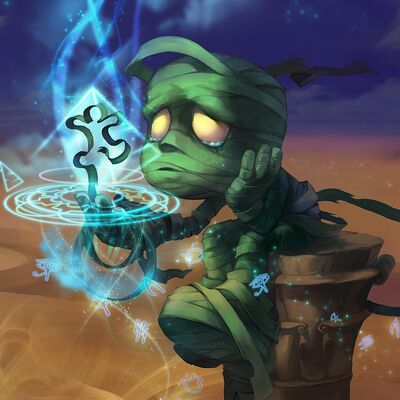 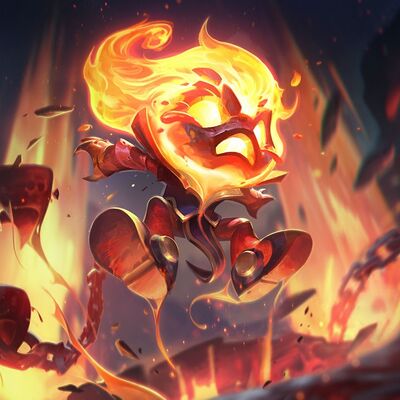 A lonely and melancholy soul from ancient Shurima, Amumu roams the world in search of a friend. Cursed by an ancient spell, he is doomed to remain alone forever, as his touch is death and his affection ruin. Those who claim to have seen him describe Amumu as a living cadaver, small in stature and covered in bandages the color of lichen. Amumu has inspired myths, folklore, and legends told and retold for generations - such that it is impossible to separate truth from fiction.

When ancient pyromancers unleashed the malevolent Infernals upon the world, they also unintentionally summoned younger, lonelier creatures. A mere spark compared to the fiery monsters now ravaging the land, Amumu seeks only friendship… unwittingly incinerating all those he touches.

Superhuman Physical Characteristics, Immortality (Type 7), Curse Manipulation, Magic, Status Effect Inducement (Can Stun opponents Via Bandage Toss and Curse of the Sad Mummy), Enhanced Senses (Highly enhanced sense of hearing and sight, All Yordles have hearing that is far superior to any human and can see the infrared spectrum of light), Illusion Creation (Can passively alter his appearance so he does not appear as a Yordle to anyone besides another Yordle), Longevity

All powers from his base plus Large Size (Type 3), Fire Manipulation, and Magma Manipulation

Speed: Subsonic reactions and combat speed (All Yordles are stated to be much faster than normal humans, Should be comparable to other Yordle mages like Lulu And Veigar) | Hypersonic+ (Able to move this fast)

Intelligence: Average (Skilled in combat, but only has the mind of a child with extremely unstable emotions.)

Weaknesses: Anything that he touches or befriends withers.