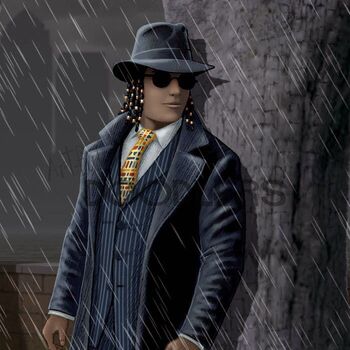 Amos Kane is the currently living most powerful Egyptian magician in the world, and the Chief Lector of the House of Life. Uncle of Carter and Sadie Kane, and younger brother of Julius Kane, he, along with his nephews, questioned the House's rules, trying to reintroduce the Path of the Gods again, as forming an alliance between gods and magicians were the only way to save the world from Apophis.

Attack Potency: At most Island level (Comparable to Carter Kane) | At least Country level (Set created the Sahara desert), Continent level with the Red Pyramid (Set could have turned all of North America into a desert)

Lifting Strength: At most Class E, higher with his combat avatar | At least Class E

Durability: At most Island level | At least Country level, Continent level with the Red Pyramid

Stamina: Very high. Can cast magic, tangle with demons, and etcetera, even when low on reserves | Godly

Range: Extended Melee Range. Planetary with some spells. Low Multiversal with the Duat.

Standard Equipment: A wand and a staff

Intelligence: A combative genius, Amos trained and prepared all magicians in The Twenty-First Nome to defend themselves from an attack of the House of Life, he also led one side of the House of Life's Civil War, and eventually became Chief Lector, who is the one responsible for all three hundred and sixty nomes, ranked only below the pharaoh himself.

Weaknesses Even as one of the most powerful magicians in the world, Amos's magic is still limited, going well over his limit can cause him to quite literally burn up. Set helps supply a good portion of his power, but as consequence, Amos must hold back the god's impulses to causes chaos and destruction, as he can harm both enemies and allies.