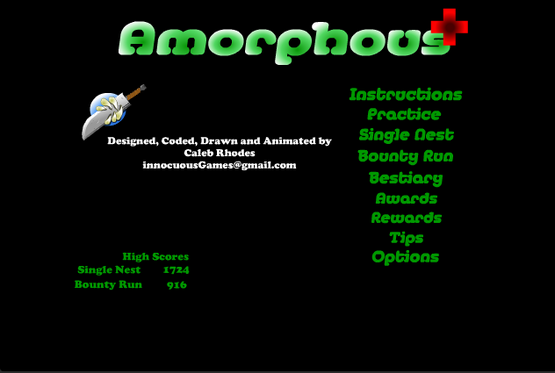 Amorphous+ is an arcade style game where a character splats blobs called Glooples. There is one of two modes. Single Nest and Bounty Run. Single Nest, where the character delves into a nest of three sizes varying in difficulty: Small, Big, and Huge. Each contains a different amount of Glooples, and different Glooples altogether, and stronger Glooples appear the more the character goes deeper into the nest. The other mode is Bounty Run, where the player enters an endless nest that varies in the ramp of difficulty. There is also a practice mode where the player can choose which Glooples to fight. A side objective of the game is to fill up the Bestiary, collect all Awards, and unlock all Rewards.

Amorphous+ is a deceptively powerful verse, with the player being city level, and the Razor Queen being far stronger. Almost every being in the game is capable of killing the main player, so other than a hierarchy to determine strength, the only difference in power is how dangerous and unpreventable the attacks are. There is a decent amount of hax with almost every character that's not the player being capable of absorption, and those who aren't have either several layers of defense, durability ignoring acids, flash freezing, spontaneous combustion, etc. The hax peaks with the Void Eater, which is capable of creating gravity wells and density beams that are similar to black holes that not even the final boss can survive.