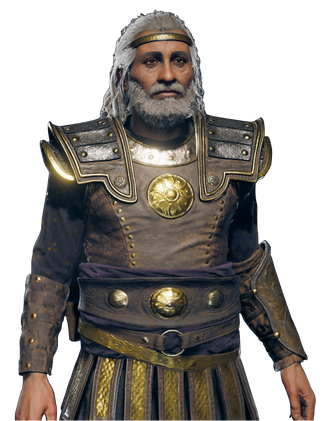 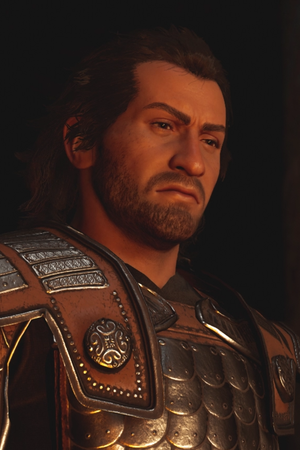 Amorges (died c. 422 BCE) was a leader of the Order of the Ancients who operated in the Achaemenid Empire during the 5th century BCE.

A former member of the Persian elite and a close friend of Darius, formerly known as Artabanus, Amorges joined the Order and prevented Darius' assassination of King Artaxerxes I, the son of Xerxes I whom Darius had previously assassinated. After Darius was branded a traitor and forced to flee Persia with his family, Amorges sent a branch of the Order to track him down and eliminate him.

Amorges is the central antagonist of Assassin's Creed Odyssey's DLC Legacy of the First Blade and the main antagonist of the DLC's third part, Bloodline.

Tier: At least 9-A, higher with the Sword of Kings

Age: Unknown, possibly at least in his 70s (Was a full-bodied adult back in the 480s BCE, shouldn't be much older than Darius)

Classification: Human, Proto-Templar, Leader of the Order of the Ancients

Attack Potency: At least Small Building level+ (On par with Darius and managed to push him back when he tried to assassinate Artaxerxes. Managed to easily hold his own against Darius and an enraged Kassandra simultaneously in an extremely long-but-futile battle), higher with the Sword of Kings (The Sword of Kings was made of adamant, the same metal used to forge most other Pieces of Eden, and despite lacking their powers, it still required the combined might of Darius and Kassandra to be broken in half even with the latter having the Spear of Leonidas and Staff of Hermes equipped)

Speed: At least Supersonic+ (Can easily fight against Darius and Kassandra at the same time)

Striking Strength: At least Small Building Class+ (Can hurt the likes of Darius and Kassandra)

Durability: At least Small Building level+ (Endured multiple powerful strikes from Darius and an enraged Kassandra, including strikes from powerful Isu weapons like the Spear of Leonidas, Staff of Hermes Trismegistus, the Sword of Damokles and Darius's Hidden Blade. Also suvived being tackled off of a cliff by Darius and still lived long enough to deliver an eulogy before dying of his injuries)

Standard Equipment: Swords (including the Sword of the Kings which was forged out of adamant, the same metal used to forge Pieces of Eden), Shield

Intelligence: Genius (A master strategist and manipulator feared by Darius himself, also possessing an extended influence across the Greek world. Was able to disguise himself as a simple man helping Kassandra without her being able to determine it before he revealed himself).

Weaknesses: Standard human weaknesses, but has survived situations that would kill most peak-level human beings.

Retrieved from "https://vsbattles.fandom.com/wiki/Amorges_(Assassin%27s_Creed)?oldid=6683649"
Community content is available under CC-BY-SA unless otherwise noted.