VS Battles Wiki
Register
Don't have an account?
Sign In
Advertisement
in: Characters, Female Characters, Longevity Users,
and 31 more 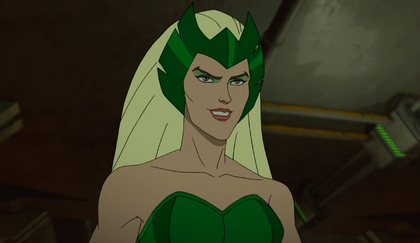 Amora the Enchantress is an Asgardian sorceress, supervillain and a member of the new Cabal. She is one of Thor's enemies. She is an major antagonist of Season 4: Secret Wars.

Amora the Enchantress is an extremely powerful Asgardian sorceress as well as an old enemy of Thor who has faced up against many times, almost every attempt she tries to ensnare his heart to obtain his affections. She is seen as one of the most powerful magicians of the Universe, perhaps losing only to Doctor Strange or Dormammu, and is proven to be the most powerful sorceress of Asgard, surpassing even magic-masters like Loki.

Attack Potency: At least Country level (Created a large castle of ice on a comet and later sent the asteroid to its nearest star to destroy it. Is comparable to the likes of Thor and Captain Marvel)

Speed: FTL (Comparable to the likes of Thor, who can fly faster than Mach speeds on Earth and faster-than-light while in space, and Captain Marvel)

Lifting Strength: Class Z (Comparable to other Asgardians like Thor)

Striking Strength: At least Country Class (Can harm the likes of Thor and Captain Marvel)

Durability: At least Country level (Can tank hits from Captain Marvel and Thor)

Stamina: Extremely High (Can fight Thor and his allies for an extended period of time)

Range: Standard melee range. At least dozens of meters to kilometers via magic

Intelligence: High. Is an extremely skilled sorceress whose knowledge about the arcane and supernatural forces exceed even the likes of Loki, as well as being a deadly strategist and a cunning individual who was able to fool the Avengers into thinking that she was an innocent woman named Elsa.