VS Battles Wiki
Register
Don't have an account?
Sign In
Advertisement
in: Tier 6, Tier High 6-A, Tier 5,
and 36 more 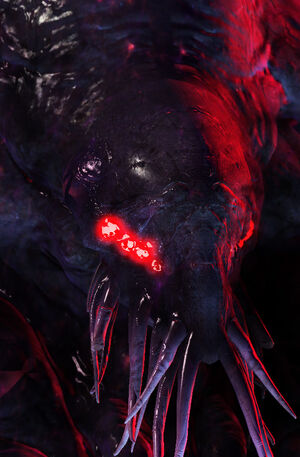 Amon is a dark and malevolent Xel'naga, bent on shattering The Infinite Cycle by destroying all life and remaking the universe in his own image. He views death as a final release and "highest ideal:" to Amon, death is the only true victory a mortal can obtain. He views himself and his actions as good, not evil, seeing life and the perpetuation of The Infinite Cycle as merely generating unnecessary suffering. This view stems from his deep hatred of the Xel'naga, which made him one of them in a way that made him feel cheated and lied to.

Despite being a relatively young Xel'naga, Amon was the strongest among them. He was able to fight many Xel'naga at once, killing many of them before being thrown back into the Void. Being deeply rooted in the Void, he has the power to bend the realm to his will, causing all that enter it to be quickly dispatched without his blessing or another similarly powerful being's protection. He cannot be killed by conventional means, as even if his true form or host body are destroyed, he will be revived within the Void, albeit trapped inside with limited influence on the normal universe until a new host body is formed. If he is killed within the Void, he will be put down for good, though doing this is incredibly difficult, as it takes the power of a newly ascended Xel'naga to kill him even after he is weakened.

Amon is one of the single most powerful beings in the StarCraft universe, being able to use incredibly potent psionic abilities and bearing incredible survivability. With endless ambition and hatred, Amon longs for the end of The Infinite Cycle and all life along with it.

Name: Amon, the Dark One

Powers and Abilities: Superhuman Physical Characteristics, Energy Manipulation and Projection, Flight, Telekinesis (Able to lift and throw characters), Telepathy, Possession (Can enter and control an unprotected entity; he enters all the beings he minds controls, and can exist inside them to avoid defeat even if his body is destroyed), Extrasensory Perception, Enhanced Senses, Mind Control (Able to control quadrillions of Zerg, millions of Protoss, and billions of Terrans from interstellar distance; created the original Zerg Hive Mind and bound most of the species to his will) and Manipulation (Can shred minds with psionic power; is vastly above the High Templar, who are able to do this), Illusion Creation, Power Bestowal, Matter Manipulation on an atomic level (Is far more powerful psionicly than the High Templar, which have the ability to perform this ability because of their power), Teleportation (Can retreat to the Void if need be; able to blink forward a short distance to close gaps or dodge attacks), Summoning (Can call forth "shadows" of beings he has encountered or massive Void Trashers), Gravity Manipulation (Able to lower or remove gravity in a localized area), Longevity (Artanis is a young Protoss, despite being over 200 years old; Amon's Hybrid Physiology should grant him similar longevity), Incorporeality (After his body is destroyed, he can linger as consciousness; however, he is unable to use his physical power in this state), Regeneration (Low-Mid; is the perfect combination of Zerg and Protoss, and should have the regenerative capabilities of the Roach), Portal Creation (As his Swarm's hivemind, he is capable of opening a portal to Warp Space to move himself and his army over interstellar distances), Perception Manipulation (Capable of altering the perception of Artanis, even when he resisted his Mind Control), Resistance to Mind Manipulation (Sarah Kerrigan received her resistance from a Xel'naga source), and Time Slow and Time Stop (When shrouded by the Void shards, Amon was immune to all weaponry of the Spear of Adun, which can slow and stop time), Acausality (Type 1; Existed before the current universe and survived the end of his universe's space-time) Spaceflight, Regeneration (Low-Godly) (Can regenerate as long as he is able to retreat to the Void), Void Manipulation, Reality Warping, Space-Time Manipulation (Users of the Void are capable of bending and warping space-time), | All previous abilities greatly enhanced, Life Creation (As a Xel'naga, it was his charge to create and seed planets with life), Longevity (A young Xel'naga is billions of years old, yet they do die from age over an unknown amount of time) | All previous greatly enhanced

Attack Potency: Multi-Continent level (Even his hybrid host form is regarded as one of the most dangerous enemies in the StarCraft universe, likely vastly outclassing the Primal Queen of Blades), at least Small Planet level with Void Shards | At least Dwarf Star level (An ancient Xel'naga artifact was capable of yielding this much energy, and the Xel'naga themselves should be more powerful than it), likely Solar System level | Universe level (Stated by Ouros to be with the Void], an entirely separate universe; is shown to destroy the universe in an alternate timeline; is stated to be a threat to the universe)

Lifting Strength: At least Class 10 (His Hybrid body is at least this large) | Likely Class Y (Amon is stated to be capable of ripping worlds apart) | Unknown (Far stronger than before)

Durability: Multi-Continent level (Implied that Kerrigan and similarly powerful hero units could not hurt his hybrid form, forcing the protagonists to use orbital bombardment from multiple planet-surface busters), at least Small Planet level with Void Shards (Stated by Karax to be completely immune to the Protoss' most powerful weapons, which include Cybros, numerous Capital Ships, and the Spear of Adun, all of which are able to destroy a planet's crust) | At least Dwarf Star level, likely Solar System level (Alarak said that "It would be easier to destroy every star in the galaxy" than kill Amon) | Universe level (Is one with the Void; can survive the destruction of the universe, which he would cause)

Stamina: Very high (Should be above the likes of Sarah Kerrigan) | Very high (Can travel between planets and only appears tired if killed and forced to regenerate) | Limitless unless recently killed

Intelligence: Extremely high (Is older than the universe; outsmarted all other Xel'naga and manipulates millions simultaneously), possibly Nigh-Omniscient with Telepathy (Stated to Artanis that nothing escapes his notice and revealed that he knew his secret plans)

Weaknesses: If destroyed within the Void, he cannot return and is killed permanently. While in the Void, he has limited power on the normal universe, requiring others to possess and control in order to carry out his will unless fully manifested outside of it. After being killed he is far weaker until he has fully recovered.