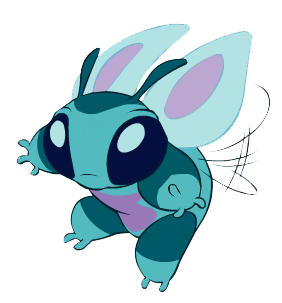 Experiment 303 was the 303rd genetic experiment created by Jumba with Hämsterviel's funding. He was designed to erase his victims' memories. 303 and the other first 624 experiments were deactivated and smuggled to Earth by Jumba during his mission to capture Experiment 626.

Age: Unknown, created prior to Stitch

Attack Potency: Below Average level (He is likely physically comparable to Hunkahunka and Babyfier)

Speed: Subsonic (Able to outrun Stitch for a decent amount of time)

Stamina: High (Could fly for quite some time without showing any signs of fatigue)

Range: Below average melee range, hundreds of meters with Memory Manipulation (Only needs to be able to look into his victim's eyes to erase their memories)

Intelligence: Above average (Able to evade capture for a while and knew to erase Jumba's memory before he could give Lilo the password)

Weaknesses: Saying the word Ohana will restore all erased memories