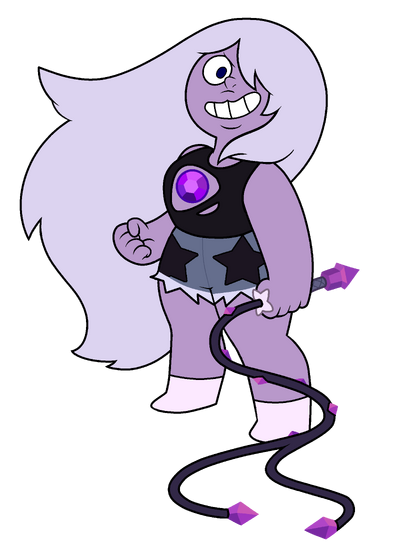 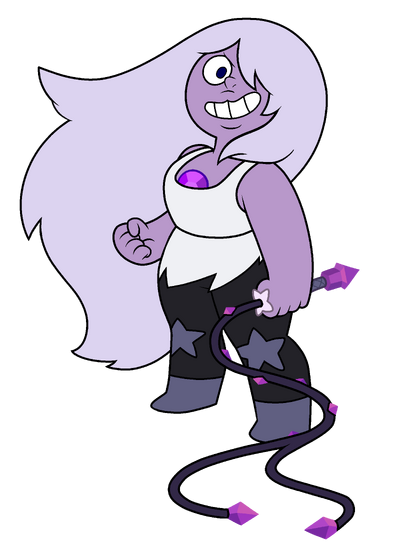 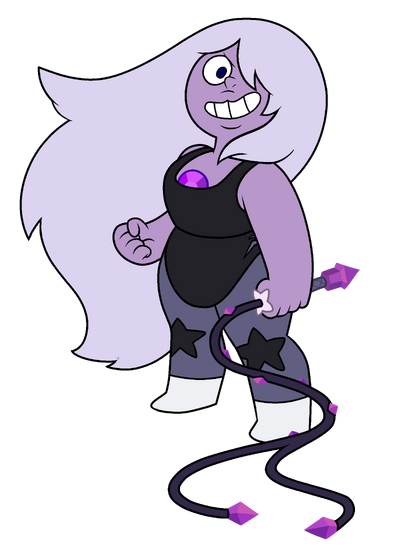 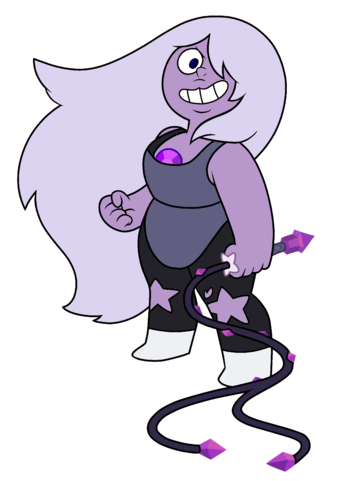 Amethyst is a member of the Crystal Gems. She is the last known Gem manufactured on Earth as a part of the Gem Homeworld's Kindergarten project, and the only Gem of the Crystal Gems to not come from Homeworld. After the Rebellion, Amethyst helped her friends protect the Earth over the next four millennia, and often aids in the shenanigans of Steven Universe, Rose Quartz's son.

Attack Potency: At least Mountain level (Revealed in the official guidebook to be not too far behind Garnet in strength, poofed a gem that could take hits from Jasper. Casually defeated a snow monster that summoned a blizzard in Summer along with Garnet and Pearl)

Lifting Strength: At least Class M (Should be superior to Steven. Can casually pull large rocks out of the ground and throw them with her whip, could partially restrain Spinel)

Durability: At least Mountain level (Should be more durable than a Ruby. Managed to take several hits from Jasper before ultimately getting "poofed")

Stamina: Limitless so long as her gem isn't damaged or destroyed

Standard Equipment: Whip(s) (Upgraded to be a flail)

Intelligence: High (More through experience than actual intelligence. She is the least intelligent of the Crystal Gems)

Standard Tactics Out of the Crystal Gems, Amethyst is the least likely to rely on her weapon in combat, instead of relying on her martial art skills and enhanced physical prowess as a method of dealing with the minor threats through forceful punches and kicks. She also is a skilled wrestler, easily defeating all her human challengers in the Beach City Underground Wrestling league. Her fighting style can sometimes be considered reckless and foolhardy; in "Monster Buddies", she used her whip to pull the Centipeetle Mother towards her, knocking her and the other Crystal Gems down.

Weaknesses: Enough damage to her physical form can revert her back to her vulnerable gem form which can be broken and destroyed. She tends to fool around while fighting. When she shrinks, the gem doesn’t shrink with her.

Retrieved from "https://vsbattles.fandom.com/wiki/Amethyst_(Crystal_Gems)?oldid=6984203"
Community content is available under CC-BY-SA unless otherwise noted.