VS Battles Wiki
Register
Don't have an account?
Sign In
Advertisement
in: Tier 6, Tier High 6-C, Marvel Comics,
and 29 more 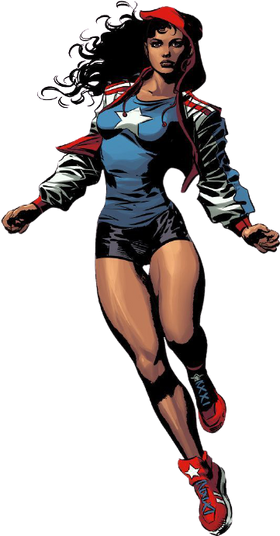 America Chavez was raised by her mothers, Amalia and Elena Chavez, in the Utopian Parallel, a dimension out of time and space and in the presence of the Demiurge. She appeared to have inherited or absorbed some or all of her superpowers from the Demiurge's ambient magical presence. When America was approximately six-years-old, the Utopian Parallel was threatened by destruction. America's mothers heroically sacrificed themselves to seal the black holes pulling Utopia into the common Multiverse resulting in their particles being smeared across the Multiverse itself. Wanting to prove herself as a hero and knowing Utopia didn't require salvation, America ran away from her home and her responsibilities. She traveled across different dimensions, eventually adopted the moniker of Ms. America, and began covertly acting as a superhero, and has been a member of the Young Avengers, West Coast Avengers, A-Force and the Ultimates.

Powers and Abilities: Superhuman Physical Characteristics, Longevity, Self-Sustenance (Type 1), Flight, Trained Boxer (Trained regularly from 11 till 15), Portal Creation (America can create star-shaped portals that can be used to travel dimensions and time), BFR (Threw Spectrum into another universe), Durability Negation by closing the portal into opponents, Acausality (Type 1; Could interact and assist a past version of herself to solve the problem she is encountering in the present), Energy Replication (Can replicate and project esoteric energy sources) and Energy Projection

Attack Potency: At least Large Island level (Traded blows with Thanos, though she is weaker than him, superior to Gamora, and damaged Blue Marvel and Captain Marvel), Can bypass conventional durability.

Intelligence: Above average (Stated to be an expert of interdimensional travel)