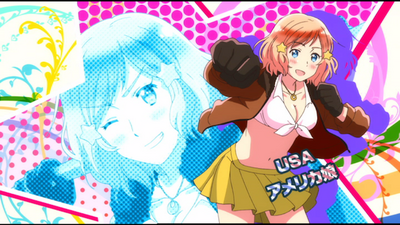 America (アメリカ, Amerika) is a main character in the series Hetalia: Axis Powers and leads the Allied Forces. He is the physical embodiment of the United States of America. In 2007 and 2008, Himaruya gave out human names to some of the characters and he received the name Alfred F. Jones (アルフレッド・F・ジョーンズ, Arufureddo F. Jōnzu).

Attack Potency: Small Country level, possibly Large Country level (Should be comparable to Basch. Considerably stronger than Francis, who in his youth managed to 'kill' the Holy Roman Empire.)

Speed: Subsonic, with Relativistic combat speed (Comparable to China who could react to beams of pure light, fought several aliens in single combat). Has the ability go up to Supersonic+ but only with the assistance of military planes.

Lifting Strength: Class 100 (As a child, was able to lift a full grown American Bison [1,400 lbs], casually carried one of Britain's cars around, and stopped a speeding bus with the heel of his foot. Should be comparable to Russia who destroyed tanks with his bare hands.)

Durability: Small Country level, possibly Large Country level (He is the embodiment of The United States, in order to kill him it is necessary to destroy the landmass, the culture or population, or change the borders, nature, and name of the nation. Also, should have similar durability to Russia.)

Stamina: Superhuman (Likely higher and should be similar to Italy as he was able to run 25km [15 miles] per day nonstop in a desert climate and Australia was able to swim across the Dover Straight which is 34km [21 miles] with ease. Stopped a speeding bus with the heel of his foot.)

Intelligence: Genius (The nations speak every human language, created their own exclusive language, been around from hundreds to thousands of years, and are military strategists with countless battle experience)

Weaknesses: He is very arrogant and doesn't like taking advice from his allies. He believes that he is infallible and that his plan is the right way and only way because he is the "hero" therefore he doesn't listen to his allies and usually just asks them to back him up, regardless of their protest.