VS Battles Wiki
Register
Don't have an account?
Sign In
Advertisement
in: Tier 6, Tier 6-C, Tier High 6-C,
and 33 more 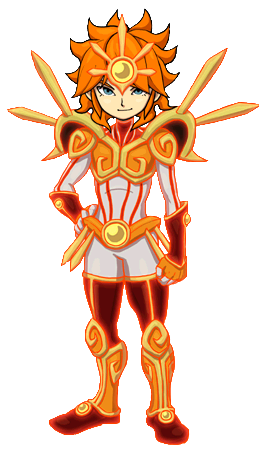 Amemiya Taiyou is a supporting character in Inazuma Eleven GO, and first appeared as captain of the Arakumo Gakuen team. He later joins Raimon during Chrono Stone and becomes the ‘midfielder of unparalleled accuracy’ in Chrono Storm, the Strongest Eleven in History (Wildfire variant of the game and in the anime).

Ever since he was young, Amemiya had a rare illness which had kept him hospitalised, preventing him from doing anything over-extensive in case of lethally damaging his body. However, he had grown a passion for soccer, but was forbidden from ever being able to play it due to the risks, though that didn’t stop him from being able to practise it alone and in secret as his only way of relieving boredom and keeping his spirits high.

One day, he had met Tenma Matsukaze at the hospital he was situated in, where they quickly became friends and bonded over the ball. Once Tenma found out about Amemiya’s situation, he had felt conflicted about whether he should be playing or not, but despite this, he frequently visited him afterwards, as did Ishido Shuuji, the Holy Emperor and leader of Fifth Sector. When Raimon had finally got to the semi-finals and were up against Arakumo Gakuen as one of their strongest opponents yet, it was revealed Amemiya was their captain, and was deemed the genius player of the decade. However during this match, Amemiya was still ill, but had forced himself to play this one match with the team he had been watching and admired no matter what happened to him. As the match made it more evident of Amemiya’s struggle, despite keeping to his title, it took Raimon everything they had to defeat their opponent. After the match, Tenma had told him that soccer would wait for him, and that he should focus on getting better so that they could play again one day.

Amemiya later makes his return in Chrono Stone, where he had heard of the situation with Protocol Omega and had wanted to offer his service to the team in order to save soccer, finally ridden of his illness and able to play. However, he feared of breaking his body beyond repair again, which required the power of Mixi Maxing with Zhuge Kongming to snap him out of and gain new power. With this power, he was later the midfielder of Chrono Storm, and helped Raimon save soccer and defeat the Second Stage Children.

Classification: Forward, Midfielder, Captain & No.11 of Arakumo Gakuen, No.18 of Raimon & Chrono Storm

Stamina: Mid-high (Has an illness that prevents him from over-exerting himself, though was easily able to keep up and outskill Raimon at the start of the match) | High (Free of his illness, and can keep up with fellow members on Raimon with ease)

Intelligence: Very High (based on soccer knowledge and skill, regarded as the genius player who only comes once a decade, being able to easily calculate his own and others’ actions better than most players.)

Weaknesses: Has had life-threatening illness since young, preventing him from over-exerting himself (Though this had been cured by Chrono Stone). Reckless to the point he would injure his body in order to win, or either too afraid of hurting himself that it affects his capabilities. Can only summon his keshin a few times, and it will require time before a Keshin that has been defeated can recover. Keshin Armed drains his stamina longer than usual and has a time limit (Which is why it is used in shorter bursts).

Keshin: A Keshin, or Avatar, is the physical manifestation of one’s spiritual energy and heart, with its strength and abilities determined by the spirit of its user. These Keshin’s are brought out with intense training and feeling among individuals, making them only usable by the extremely skilled. These Keshin’s take the form of a large anthropomorphic creature that appears visibly behind their summoner and with this Keshin summoned, the user has the physical force and power of it on their side, increasing their strength and momentum as well as gaining new hissatsu or abilities. In some cases, however, Keshins can only be brought out a limited number of times and if destroyed, they will require time to restore for the user to summon them back (Though is usually only a few minutes or so within the matches). However, Keshin drawing is possible which allows teammates to give a portion of their spiritual energy to draw out and strengthen another person’s Keshin. Keshin fusion is also possible, in which users can fuse their souls to create a stronger keshin. Keshins also protects the user’s mind and spirit preventing them from being mentally deterred from their passions or mind-controlled (Note that it doesn’t protect from any other mental attacks). In the Danball Senki crossover, it is also stated that Keshins can prevent their users from being completely erased from space-time, though only if their spirits are strong and do not give in to despair. 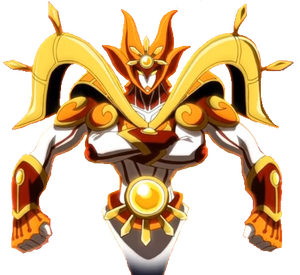 Taiyou Shin Apollo, or Sun Deity Apollo, is Amemiya’s Keshin, resembling that of a 4 armed titan based on the Sun god Apollo. Apollo is a main asset to Taiyou, who uses it commonly in order to score if he wants to break through defenses via power. Its flame is described to dazzle anyone who sees it and is a particularly luminous keshin. When its power was drawn out by 4 other Keshin users on the Arakumo team, it was able to match that of Sei Kishi Arthur, the combination of Majin Pegasus Arc, Kensei Lancelot and Sousha Maestro (The keshins of Tenma, Tsurugi and Shindou), though was defeated. 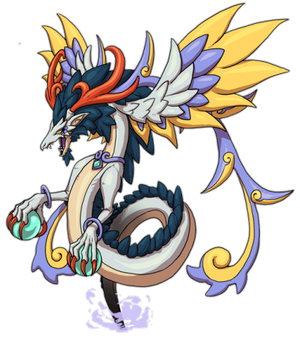 Souten no Hasha Gyokuryuu, or Jewelled Dragon Cychr, is a keshin granted to Amemiya through his Mixi Max form with Zhuge Kongming in Chrono Stone. This keshin is shown as abnormally large compared to others and is deemed the ‘Heavenly Protector’ and spirit of the wood. It has also been shown that this Keshin can induce Mixi Maxing itself, though is unknown if Amemiya can do this too given it was granted to him.

Mixi Max: Zhuge Kongming: Amemiya possesses a Mixi Max transformation with Zhuge Kongming, or Shokatsu Koumei, a Chinese warfare strategist who works with Liu Bei and is regarded as one of the most intelligent people in history. With this transformation, both Amemiya and Kongming’s auras have been fused so Amemiya gains her power, intelligence, and spirit. When this transformation is active, their features merge as Amemiya’s hair turns purple and becomes bundled. Unlike traditional Mixi Maxing, this form was bestowed upon him by Kongming and her keshin, which allows him to become the 'Midfielder with unparalleled accuracy' in Chrono Storm, the Strongest Eleven in History. Amemiya can also use Keshin Armed while in his Mixi Max form to obtain even higher power, though it drains energy at a faster rate.