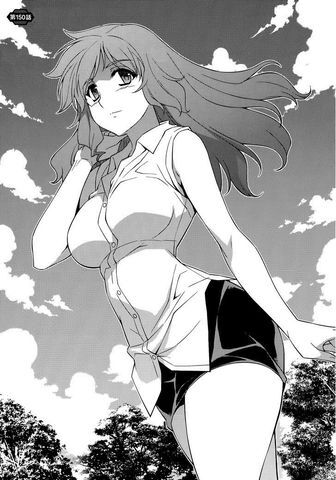 Amelia Evans is a Chevalier bodyguard and was originally a member of the E-Pandora Project. She was the strongest among all the E-Pandora. After the 11th Nova Clash, she was assigned to be part of the personal detail of her former superior, Scarlett Ohara.

Volt Weapon - An unnamed light lance with a whale-knife blade. She was the only E-Pandora to have been able to summon a Volt Weapon without the need of the Mark IV.

As an E-Pandora, Amelia is slightly weaker than regular Pandora, despite her being the strongest E-Pandora, stated to be three times stronger than the rest.

In Busters Arc, Su-Na Lee states that Amelia's abilities have greatly increased, and risen to levels far above a E-Pandora.

After Chiffon returned Amelia to her human form, Amelia had become a real Pandora, whose abilities now far supersede regular Pandora, possibly on par with a Transcendent Pandora. Amelia's speed, strength, agility, and Volt Texture manipulation have increased dramatically, to the point that she is slightly superior to a Plasma Stigmata-empowered Isuzu Sawatari.

Mark IV Enhancement - When she took the Mark IV drug, her abilities were enhanced and she was able to defeat a ranking Chevalier Pandora, Annie.

Nova Form - Amelia has been also shown to be able to enter in a minor state of Nova Form after pushing herself too much, as shown when Elizabeth realizes she has been fighting unconscious. As she was nearing her complete Nova-transformation; Freezing no longer has any effect on her, demonstrated when she easily moved through Bentley's Freezing, and her posture became more Nova like as noted by Chiffon.

Retrieved from "https://vsbattles.fandom.com/wiki/Amelia_Evans?oldid=6718072"
Community content is available under CC-BY-SA unless otherwise noted.