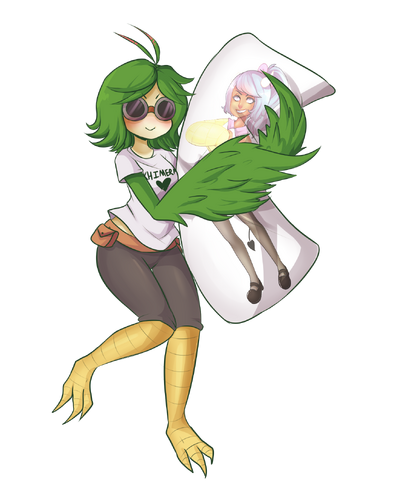 Amelia is a child prodigy. Her intelligence and mechanical prowess is rivaled only by her short temper and violent disposition. After a prior arrest, she was drafted into the Sea Spiders. She designs and pilots their airship, The Albatross.

Powers and Abilities: Superhuman Physical Characteristics, as a harpy, she can likely fly, can use her feathers as projectiles, Genius Intelligence

Speed: Subsonic+ (Can keep up with Chelshia, her dash attack can move faster than the eye can fully process)

Stamina: Likely high (can fight Chelshia several times, once fighting her practically back to back)

Standard Equipment: Her airship, The Albatross

Intelligence: Genius (Is stated to be a child prodigy. She designed a working airship and even knows how to pilot it, was able to impress the Professor, who created artificial life and the first synthetic monster girl, with her intellect, and the Professor stated that her designs on The Albatross were revolutionary)

Feather attacks: Amelia either tosses her feathers straight forward in arc, or jumps in the air and shoots her feathers down below.

Charge: Amelia charges forward at high speeds in order to ram the opponent.