VS Battles Wiki
Register
Don't have an account?
Sign In
Advertisement
in: Tier 8, Tier High 8-C, Tier 7,
and 24 more 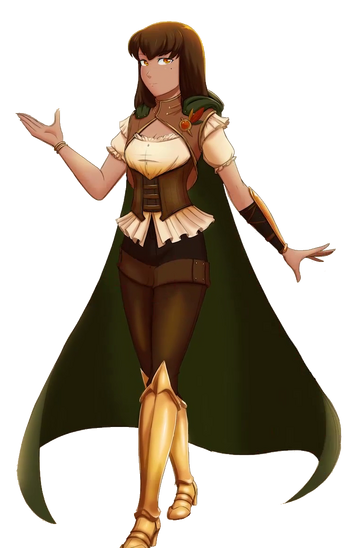 Amber was the previous Fall Maiden. As a young girl, she received the powers of the Fall Maiden, granting her tremendous power and becoming the next in a line that persisted for thousands of years. However, due to the actions of Cinder Fall, half of her powers were stolen, causing her to fall into a coma. As she was unlikely to ever wake up, and in order to ensure that the rest of the powers would not go to her assailant, Ozpin and his group planned on transferring her portion to someone else. However, she would eventually be killed by Cinder during the Battle of Beacon, causing the rest of the powers to go to her.

Superhuman Physical Characteristics, Weapon Mastery (Skilled staff user), Skilled Hand-to-Hand Combatant, Aura (Able to use her Aura for numerous purposes), Forcefield Creation (Aura can be used as a full-body forcefield), Statistics Amplification (Can use Aura to enhance her striking power), Enhanced Senses (Can use her Aura to sharpen her senses), Regeneration (Mid-Low), (Can unlock the Aura of another person), and Resistance to Extreme Heat and Cold (Aura protects the user from sub-zero temperatures, allowing them to walk through a blizzard in casual clothing or be encased in ice without being cold, as well as extreme heat up to and including the heat of flames, being blasted with steam, and being submerged in lava without being burned)

Attack Potency: Large Building level+ (Fended off Mercury, Emerald, and Cinder Fall all at once), Town level, possibly higher with Maiden Powers (Comparable to other Maidens such as Penny, who destroyed a large hanger door and Cinder who possibly broke a shield that survived this)

Lifting Strength: At least Class M (Should be stronger than characters like Sun), Class G with Maiden Powers (Should be comparable to Penny)

Intelligence: Above Average (Amber is highly skilled in combat, being able to simultaneously match Cinder, Mercury, and Emerald in a fight with both her staff and her bare hands. She is also somewhat skilled with her Maiden powers, but as stated by Qrow, she is still relatively inexperienced with them, and as such, she is unable to utilize them to their fullest potential)

Weaknesses: Somewhat inexperienced in using her powers. Continual damage to her Aura will cause it to decay to the point where she can be left open to more significant damage. Aura's durability is cumulative; it will deplete with each attack she takes and can be brought down by characters of similar strength. Constant exposure to extreme temperature can drain the user's Aura.