VS Battles Wiki
Register
Don't have an account?
Sign In
Advertisement
in: Tier 7, Tier Low 7-B, Unknown Tier,
and 30 more 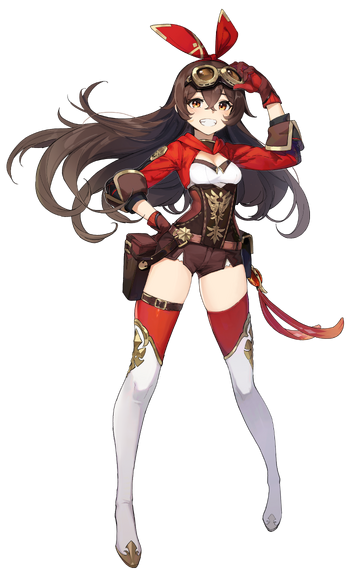 Amber is a rising star and the last Outrider of Mondstadt's Knights of Favonius.

She is the first to meet the Traveler outside of Paimon, and is the one who gave them their first glider. She assists the Traveler in resolving the threat of Stormterror up to dispelling the vicious wind storm it created, before participating in the defense of Mondstadt from the invading monsters instigated by the Abyss Order.

Powers and Abilities: Superhuman Physical Characteristics, Expert Archer, Magic, Fire Manipulation, Summoning and Limited Telekinesis (like all Allogenes, Amber can freely summon and telekinetically move her primary weapon), Transformation, Speed Amplification, Elemental Intangibility and Flight (can transform into Pyro energy for greater mobility, increased speed and flight), Forcefield Creation (like all Allogenes, Amber can erect an elemental shield to defend against attacks from far stronger opponents), Creation (can create and summon Baron Bunnies, which attract enemies and explode after a set amount of time or destroyed), Duplication (Amber can double her arrows per shot and duplicate her Pyro arrows to unleash Fiery Rain), Danmaku (with Fiery Rain), Statistics Amplification (with Precise Shot and Wildfire) and Damage Boost (with It Burns! and It's Baron Bunny!, which increase the potency of Fiery Rain and Explosive Puppet respectively), Disease Manipulation and Empathic Manipulation (Prolonged exposure to the Smaragdus Jadeite, which contain concentrated elemental energy, can cause effects which vary from illnesses at best to changes in personality at worst[1]), Enhanced Senses/Extrasensory Perception (Has Elemental Sight which allows Amber to detect elemental traces), Resistance to Disease Manipulation and Empathic Manipulation (Visions users can resist the effects of Smaragdus Jadeite[1]).

Attack Potency: Small City level (Amber was capable of harming Andrius during Razor's story quest, as she acted as support during the battle; Jean notes that Amber had improved greatly in recent times, meaning she is far stronger than she was when she injured and dealt the finishing blow to Barnabas in the manga, who was at the time transformed by Archon residue).

Speed: Massively Hypersonic (Amber is comparable to Razor, via keeping up with Andrius).

Stamina: High. Amber is extremely energetic and is constantly out in the field due to her duties as an Outrider.

Standard Equipment: Her Raven Bow, which was recently replaced with a Favonius Warbow, her Pyro Vision, a Glider and dozens of bombs.

Intelligence: At least Gifted. Amber is described as being a rising star among the Knights of Favonius, and her more recent growth impresses even Jean, who expects that she would soon become famous enough for her deeds to be spoken of by bards.

Pyro Vision: A Vision is a gift from the gods of Teyvat that allows humans to wield elemental powers, turning them into Allogenes. Amber's Vision is Pyro-attributed, thus granting her the ability to freely manipulate fire.