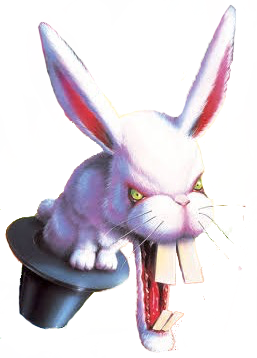 In the beginning, Amaz-O was at the height of his fame. He became the most brilliant magician in the world and he had appeared in the top TV shows. A lot of people had looked up to Amaz-O, except for a sorcerer named Frank, whom people never took seriously because he was kind of ugly. Frank was jealous of Amaz-O and he wanted to be famous like him and he wasn't, so he turned Amaz-O into a rabbit. To make matters worse, Amaz-O was only a magician, so he wasn't powerful enough to reverse Frank's spell. But Amaz-O was determined not to let that stop him, so he built a mechanical dummy and made it look like his former self and continued doing his shows as before, only with the dummy looking like he's the magician. Amaz-O had been real bitter ever since he had been turned into a rabbit and he was determined to not let anyone get too close and discover his secret, fearing it will jeopardize his career and reputation.

Powers and Abilities: Illusion Creation, Creation (His bag of tricks had multiple balls and doves appear out of thin air) , Transmutation (Can turn others into bunnies). Small Size (Type 1) and Superhuman Speed and Enhanced Senses when a bunny.

Attack Potency: Human level (Is physically a normal human), Below Average as a bunny

Intelligence: At least Gifted (Is skilled in illusions and tricks, constructed a robot replica of himself)

Retrieved from "https://vsbattles.fandom.com/wiki/Amaz-O_(Goosebumps)?oldid=5752420"
Community content is available under CC-BY-SA unless otherwise noted.