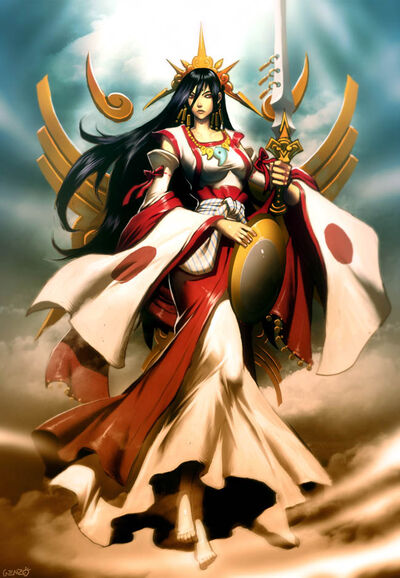 Amaterasu, Amaterasu-Ōmikami or Ōhirume-no-muchi-no-kami is the primary kami of Japanese Mythology and Shintoism. She is seen as the Goddess of the Sun and Light, but also of the Universe. She is the elder sister to both Tsukuyomi, the God of the Moon and Susanoo, the God of Storms, and rules over all heavenly kami in Takama-ga-hara. According to the Kojiki and the Nihon Shoki, in Japanese Mythology, the Emperors of Japan are considered to be direct descendants of Amaterasu.

Attack Potency: At least Small Planet level (Immensely above her brother Tsukuyomi, who personifies the moon itself), likely Star level (The Goddess / Personification of the Sun itself. As Shinto Myths are believed to this day, the Sun's actual size should be used) or Far Higher (When she hid in a cave, all light began to fade and the universe itself started to die). Possibly Universe level+ (Often believed to be comparable to, or even superior to Amenominakanushi, or even Amenominakanushi itself. See feats for further descriptions)

Speed: Unknown. At least FTL+ (Capable of traveling from Earth to Takama-ga-hara (Heaven) in seconds, and firing arrows that fly from it to Earth in seconds. Takama-ga-hara is often equated to the Sun in location, when it's not outright believed to be infinitely apart from Earth). Possibly Immeasurable (She is often equated to Amenominakanushi, who existed before time itself)

Intelligence: Incredibly High. Is the Empress of the Heavens, ruling over all Kami and the Universe itself.