VS Battles Wiki
Register
Don't have an account?
Sign In
Advertisement
in: Tier 8, Tier 8-A, Characters,
and 19 more 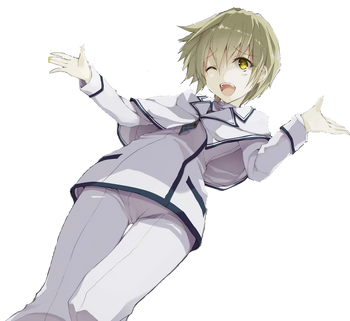 Amane Shinomiya is the alias of Shion Amamiya. He is a first-year student of Kyomon Academy and member of Akatsuki. He, alongside with the infamous Ouma Kurogane, reach the semi-final of Stars Sword Art Festival as best four.

While Amane is not very proficient with sword and could barely block Ikki's sword once, his ability Nameless Glory makes him extremely powerful to the extent that he lost to Ikki only because he wanted the fight to happen in the first place.

Furthermore, same as Stella Vermillion and Ouma Kurogane he is an A-Class blazer, however he is the only blazer known to have an S-ranked criteria, that criteria being his Luck.

Powers and Abilities: Superhuman Physical Characteristics, Master Swordsmanship (Could block Ikki Kurogane's attack), Enhanced Senses, Aura (Can turn his dark aura into several hands), Weapon Creation (Like other blazers he can summon his device at will, which consists of multiple swords), his device Azure will always strike the opponent's weakness even if thrown randomly, Supernatural Luck (He is the only blazer in the series with an S-rank Luck), Precognition (While he cannot predict the future, he knows everything that's going to happen due to it being part of his imagination), Fate Manipulation (Manipulates the fate of the world around him), Probability Manipulation (Made it so that the best doctor in japan who happens to be a blazer would make a mistake in determining the condition of hundreds of patients, a thing which could have never happened according to her, possible simply because he wished it. In his fight against Shizuku he reveals that anyone can make mistakes while fighting as such whenever Shizuku, one of the most proficient blazers in the tournament, tried to attack him, she would trip, miss or fail magic), Causality Manipulation (Nameless Glory can work on a form of causality where as long as there is a cause which is Amane's wish a result will always happen without caring about how it happens. Furthermore by giving shape to his aura Amane can completely skip the "process" and bring about any result he wishes instantly), Death Manipulation and Biological Manipulation (If he wishes it he can make anyone's heart instantly stop like he did in his fight versus Ikki), Power Nullification, Power Modification (When Shizuku tried to ambush Amane she was utterly destroyed because of his wishes making it so that she would make mistakes in the use of mana, thing she as a high class blazer with abnormal level of mana control considers child's play, as such magical attacks would be almost useless against him), through Nameless Glory he can achieve some level of Immortality (In his fight against Shizuku she used ice spears to pierce his limbs and skull but Amane simply got up because Nameless Glory made said damage non lethal)

Attack Potency: Likely Multi-City Block level (Weaker than Ikki Kurogane. However, he could still stop Ikki's Intetsu with his swords). Unknown with Nameless Glory (It has realized Amane's every wish and has never failed to do so, furthermore Amane implied that he could even make the moon come crashing down if he so desired)

Durability: At least Athlete level (He is portrayed as being rather fragile). Nameless Glory's effects make it virtually impossible for him to die.

Range: Extended melee range with swords. Tens of meters by throwing Azure. Universal with Nameless Glory (He is capable of affecting the universe, which contains infinite nodes.)

Standard Equipment: Azure (His Device, can take the form of several swords)

Weaknesses: While Nameless Glory makes his will and wishes absolute, the exact process in which these wishes will become true are unknown to even Amane. Although he can wish for exact events to take place, he usually only wishes a result.

Azure: Amane's Device is multiple short silver cross-like swords. They can be used as projectile weapons and he can also dual-wield them in melee combat. By combining the power of Nameless Glory, they will aim to his enemies own weaknesses even if Amane throws it unintentionally.

Nameless Glory (過剰なる女神の寵愛ネームレスグローリー, Nēmuresu Gurōrī, lit., "Goddess' Excessive Favor"): First though to be a form of precognition by many, Nameless Glory is unique ability Amane has that realizes his every wish. The process through which these wishes are realized are unknown and usually unimportant to Amane, however his will is absolute. Nothing he wishes can fail to happen, even some of the strongest and most capable blazers were making rookie mistakes in mana control and even Ikki who is one of the best swords fighter was slipping or tripping mid fight. This ability is so strong that even Edelweiss spoke of it's strength to Ikki after he passed out, indicating that this ability would be a threat even to her. The way this ability materializes ranges from Probability Manipulation capable of bringing out that almost non-existent chance for experts to make mistakes, to Fate Manipulation where his belief even affected fate itself when he wished for everything to go smoothly in their school attack.

Dark Aura: With his own will, Amane can generate and manipulate dark aura which takes the form of hundreds of hands. This aura can transform its targets to the desired outcomes directly without the process itself. In Ikki's case, Amane desired death and destruction. Therefore, the aura can turn everything it touched to ashes and kill Ikki by merely touching him.