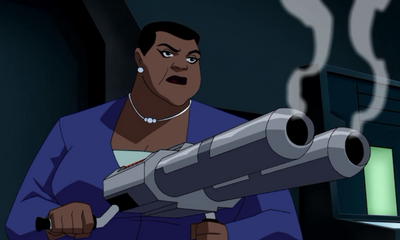 Amanda Waller was a US intelligence official who went on to become the leader of Peoject Cadmus, a think tank whose goal was to find counters to the perceived growing threat of Metahumans and the Justice League. After the fiasco with Lex Luthor, Braniac, and the rampage of a mutated Wade Eiling, she came to genuinely respect the Justice League as a force for good in the world, Batman in particular. Her respect for the original Batman Bruce Wayne's skills and brilliance went so for as to lead her to come up with Project Batman Beyond, whose goal was to ensure that the world's superheroes would always have a highly capable human leader and moral compass in the form of a Batman.

Tier: 10-A physically, 9-A with Cadmus weaponry

Attack Potency: Athlete level (Comparable to Wade Eiling and other trained human soldiers), Small Building level with Cadmus weaponry (Powerful enough to blast away and somewhat harm a slowly mutating Braniac possessed Lex Luthor, who was vastly more durable than the likes of Batman at the time, and also blast large holes in solid stone walls)

Range: Dozens to potentially hundreds of metres with Cadmus weaponry

Intelligence: Very High. Amanda Waller is a genius with an outstanding education and was a high ranking intelligence official under three US administrations. She later went on to head Project Cadmus, a secret think tank and research organization dedicated to evening humanity's odds against the growing population of Metahumans and the growing power of the Justice League. It has also been made clear from her leadership of Cadmus and Project Batman Beyond that she is a masterful schemer and political manipulator.