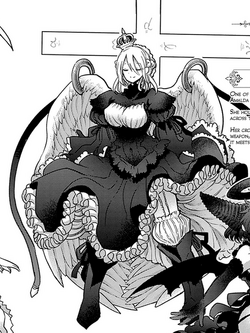 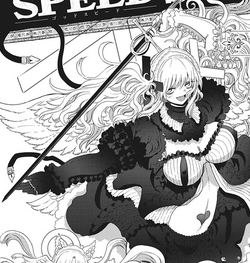 Amalda was one of the 4 most powerful angels granted the concept of comfort, she has great power and influence over the continent and is the main leader of the sanctuary.

Classification: Angel, The Angel of comfort

Superhuman Physical Characteristics, Weapon Mastery (Adept with swords), Longevity (Angels live eternal lives unless killed), Immortality (Type 1), Sound Manipulation (Can attack via yelling out letters), Flight, Telekinesis (Can telekinetically manipulate metals), Aura (Her aura overwhelms her opponents forcing them to be more submissive to her), Light Manipulation (Her cross behind her is a sword made of light), Large Size(Type 0), Extrasensory Perception (can sense people around her), Non-combat applicable Resurrection, Possession, Mind Manipulation and Soul Manipulation (angels can regenerate from just their souls which are stored in "indestructible" hearts when put into a Revenant, they erode the mind and soul of their victim), Conceptual Manipulation and Law Manipulation (Using the concept, she uses this to allow her attacks to slice through anything with "Ease" and to tank any attack by making them "Relaxing" thus she nullifies attacks and she has reached the level that she affects abstracts laws of physics), Durability Negation, Regeneration negation (One swing from her sword wuld have kept Akira unable to regen), Non-Physical Interaction (can attack shadows) and Resistance to Mind Manipulation, Soul Manipulation (the mind and souls of angels reside in an "indestructible" heart, outside forces are not able to affect it), Paralysis Inducement (broke out of shadow paralysis) and Empathic Manipulation (As the Aspect of comfort Amalda is unable to feel anything but comfortable and relaxed)

Attack Potency: At least Small City level (As one of the strongest angels she was far stronger than fused Akira and capable of doing this), she can also ignore durability with her conceptual and law manipulation on her attacks.

Lifting Strength: Peak Human, via being a giant.

Durability: At least Small City level (Her manipulation of comfort allows her to tank attacks way above her level)

Stamina: Unknown, likely very high due to having a vast amount of energy as a powerful angel

Range: Longer than standard sword range due to being over 5 meters tall, tens of metres with sword of light and telekinesis.